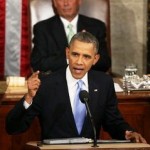 The Zionist Organization of America (ZOA) has expressed criticism and concern at President Barack Obama’s observations and assertions regarding Iran and its nuclear weapons program in his State of the Union address. The ZOA has pointed to five misleading claims on Iran in President Obama’s speech:

1. Since the Geneva agreement in November, Iran’s nuclear program has been halted and even rolled back in part;

4. His negotiations with Iran are no different or more threatening than John F. Kennedy and Ronald Reagan negotiating with the Soviet Union;

5. Approving new, tougher sanctions in the event of Iranian default on the Geneva agreement or in concluding a final settlement “threatens to derail these talks.”

ZOA National President Morton A. Klein said, “The ZOA is troubled that President Obama has delivering a State of the Union address filled with misleading statements regarding the vital issue of Iran’s nuclear weapons program. He is telling the American people that the Geneva Agreement is strong deal and that they have no cause to be concerned, when in fact it a weak deal about which they should be deeply concerned.

“In addition to Prime Minister Netanyahu, nuclear experts have publicly stated that, even if Iran fully complies with the Geneva Agreement, it will only extend the time necessary for Iran to produce a nuclear bomb from two months to three months.

“President Obama omitted to mention that the Geneva Agreement provides Iran with some $20 billion in sanctions relief. If Geneva falls apart, Iran gets to pocket the money. Iran will earn billions through new and renewed contracts. It will take time for new contracts to be halted. Even if, with hard work and good luck, certain sanctions are reinstated, it would take many months for this to occur and many more months for them to take their toll on Tehran.

“In other words, at best, we have lost a year – if not two or three – to bring the regime around to the hard choice of abandoning its nuclear weapons program through economic pressure. Given Iran’s ability to become a ‘break-out’ nuclear power in a matter of mere months, we no longer have a year to spare.”

“… it is American diplomacy, backed by pressure, that has halted the progress of Iran’s nuclear program — and rolled parts of that program back — for the very first time in a decade. As we gather here tonight, Iran has begun to eliminate its stockpile of higher levels of enriched uranium.” [ZOA: The Iranian nuclear weapons program has not been halted. Construction continues at Iran’s plutonium facility at Arak; Iran retains all its current uranium stocks, being required only to reduce their enrichment levels to 5%; scientific research and testing on its long-range ballistic missile program, essential to delivering a nuclear strike, has not been halted. Only nuclear enrichment to high levels has been halted, temporarily, and turning uranium stocks into an oxide, as provided for in the Geneva Agreement, is an entirely reversible process. As the Iranian Deputy Foreign Minister, Abbas Araghchi, recently said, “We can return again to 20% enrichment in less than one day, and we can convert the material again.”].

“[Iran] is not installing advanced centrifuges. Unprecedented inspections help the world verify every day that Iran is not building a bomb”: [ZOA: This falsely implies that Iran has been prevented from installing large numbers of centrifuges that would otherwise be coming into operation. This is untrue: Iran already has 18,000 centrifuges, including many thousands that are new and can produce enriched uranium to weapons-grade level in far less time than the older generation of Iranian centrifuges. Iran is still manufacturing centrifuges which can be installed promptly if Tehran decides to do so. The President’s statement misleadingly focuses on installation of centrifuges when the issue is the continued existence and production of centrifuges — the Geneva agreement did not compel Iran to dismantle a single one of its 18,000 centrifuges. Moreover, Iran can continue all its research and development programs, including upon making faster and better centrifuges].

“Unprecedented inspections help the world verify every day that Iran is not building a bomb”: [ZOA: The inspections regime covers only declared and known Iranian nuclear sites that Iran agreed to put under inspection, not the several others that are suspected to belong to its nuclear program, such as its facility at Parchin. The Parchin facility is known to have been involved in such work in previous years and satellite photographs show it to have structures and installations consistent with nuclear work. Furthermore, the inspectors do not have prompt, unhindered access to the sites they are inspecting; they are dependent on Iranian cooperation, which can be delayed, enabling concealment].

“If John F. Kennedy and Ronald Reagan could negotiate with the Soviet Union, then surely a strong and confident America can negotiate with less powerful adversaries today.”: [ZOA: Though totalitarian like the Iranian regime, the Soviet regime was deterrable because its was not willing to risk destruction, because its goals were materialist and atheistic. The Iranian regime, in contrast, may not be deterrable. Its leaders have spoken of wiping out Israel. In May 2012, Iranian Chief of Staff, Major-General Hassan Firouzabadi, said that “the Iranian nation is standing for its cause, which is the full annihilation of Israel.” Iranian leaders have even spoken of the worthwhileness of Iran sustaining a nuclear strike as an acceptable price for obtaining Israel’s elimination. In 2000, then-Iranian president Ali Akbar Hashemi Rafsanjani, said, “If one day, a very important day … the Islamic World will also be equipped with the weapons available to Israel now, the imperialist strategy will reach an impasse, because the employment of even one atomic bomb inside Israel will wipe it off the face of the earth, but [such a bomb] would only do damage to the Islamic World.” Furthermore, Ayatollah Khomeini once stated, “We do not worship Iran, we worship Allah … I say let this land [Iran] burn. I say let this land go up in smoke, provided Islam emerges triumphant in the rest of the world.” As the doyen of Middle Eastern historians, Bernard Lewis, has put it, “MAD, mutual assured destruction … will not work with a religious fanatic. For him, mutual assured destruction is not a deterrent, it is an inducement.” Moreover, the Soviets knew — or came to know — they were dealing with resolute and principled leaders in John F. Kennedy and Ronald Reagan, who were willing to do whatever was necessary to ensure American security. Indeed, Reagan refused a nuclear missile deal with the USSR in Reykjavik because he regarded it as flawed and surrendering too much, precisely the sort of deal President Obama approved at Geneva].

“The sanctions that we put in place helped make this opportunity possible. But let me be clear: if this Congress sends me a new sanctions bill now that threatens to derail these talks, I will veto it”: The sanctions bill, introduced by Senators Mark Kirk (R-IL) and Bob Menendez (D-NJ), is designed to strengthen the U.S hand in negotiating with Iran so as to enable the speedy imposition of new, tough sanctions on Iran if it violates the Geneva agreement or fails to reach agreement on dismantling its nuclear weapons program.This legislation, if passed, would thus enhance the Administration’s leverage in negotiations with Iran by showing that serious consequences await Tehran if refuses to come to a diplomatic deal that terminates its nuclear weapons program. As it stands, the Geneva Agreement is so permissive towards Iran that its obligations are minimal. Even if Iran violates these minimal obligations, it would require President Obama to certify such violation. President Obama’s threat of a veto, thus siding with Iran over a bipartisan Senate majority, sends the destructive message that the U.S. is not serious about stopping Iran, just as his threatening military action against Syria if it used WMDs, only to do nothing when it actually did, sent the same message. Finally, even if Iran complies fully with the Geneva Agreement, its ability to produce a nuclear weapon will be delayed only one month; meanwhile, it can continued unhindered moving closer to having all the other aforementioned components of its nuclear weapons program].