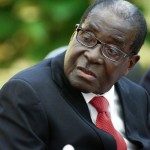 Zimbabwe president Robert Mugabe has claimed the reason he is not invited to Western summits is because Barack Obama is afraid of him.

“It’s your support which enables me with my small frame to instill fear in the likes of Obama,” the 90-year-old, who has been widely censured for human rights abuses, told an audience of supporters. “In the past, when we attended these meetings, Western leaders would disappear once they knew that I was around.”

The U.S. has enforced a travel ban and asset freeze on Mugabe for the past 12 years, so his pariah-status is not new to the Obama administration. Mugabe was one of the few African leaders not invited to the U.S.-Africa summit in Washington D.C. last month. Read more at The Telegraph.