It was an impressive display of unity on Sunday at a planned pre-election leadership meeting hosted by the Flatbush Jewish Community Coalition. The legislative meeting, originally designed to provide community representatives with a forum to express their concerns and to give elected officials a platform to share their accomplishments with their constituents, took on even greater meaning one day after the horrific Shabbos morning massacre in a Pittsburgh synagogue. The brutal attack left eleven people dead and the Jewish community worldwide devastated and outraged.

The forum took place at the new OHEL building in the heart of Flatbush, with a full roster of federal, state and city officials coming to listen to representatives of the area’s many shuls, yeshivos, organizations and businesses express the local community’s concerns.  Despite the geographic distance, all eyes were on Pittsburgh where Saturday’s bloodbath served as a frightening reminder that anti-Semitism is sadly alive and well, further highlighting the importance of the FJCC’s role as the organized voice of the local community on civic, social and political issues.

Well over one hundred  community leaders and activists  representing a myriad of Flatbush institutions and thousands of local residents turned out for the meeting where twenty- four elected officials, political candidates and judges addressed the crowd, each one expressing sympathy and anger over the deadly display of anti-Semitism while calling for strength and solidarity.  The urgent need for improved security was stressed repeatedly along with a commitment for local Jewish communities across the nation to stand as one in the fight against hatred and intolerance.

Numerous participants took advantage of the opportunity to speak about the heightened sense of vulnerability that has cloaked Jewish communities from coast to coast, with a heartfelt plea by the head of one of Flatbush’s largest schools to proactively enhance school security before tragedy strikes again.  The meeting, which was chaired by FJCC leaders Josh Mehlman, Chaskel Bennett, Leon Goldenberg, Avi Schick and Shimon Lefkowitz, was followed by a press conference hosted jointly by the FJCC and Borough President Eric Adams with the participation of numerous elected officials. Mr. Adams urged all off duty police officers to bring their weapons with them to their houses of worship and demanded the state to review social media postings before granting gun permits to any applicants.

“There are simply no words of condemnation that can truly express our anguish and disgust at the perpetrator of this hate-filled crime and, unfortunately, others like it,” said Bennett.  “Any platform or group, including those on social media that serve to stir up and metastasize bigotry and anti-Semitic hatred, needs to be shut down for incitement of violence.”

After the conclusion of the press conference, police liaisons Rafi Treitel and Peter Rebenwurzel and FJCC leaders met with NYPD Assistant Chief Brian Conroy, commander of Patrol Borough Brooklyn South, to discuss increased safety measures for all local shuls in light of the Pittsburgh attack.

The outpouring of support throughout the day was extremely reassuring, noted Mehlman.

“We saw a tremendous show of unity today as individuals representing different political parties, faiths, cultures and communities came together to publicly take a stand against anti-Semitism,” said Mehlman.  “The Flatbush community has seen positive results as it has united under the auspices of the FJCC and we will continue to address local concerns, day to day issues with the same sense of solidarity and urgency.” 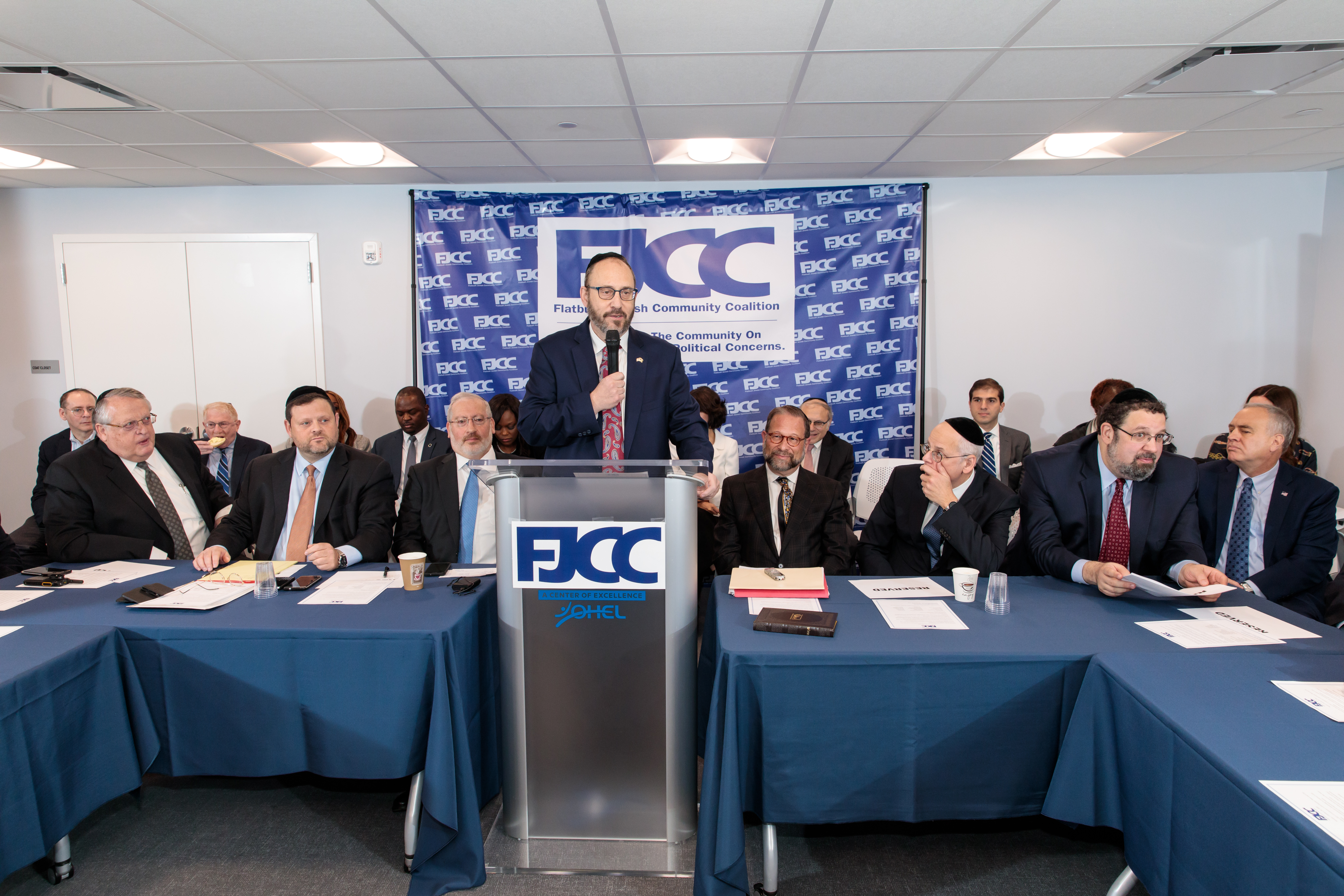 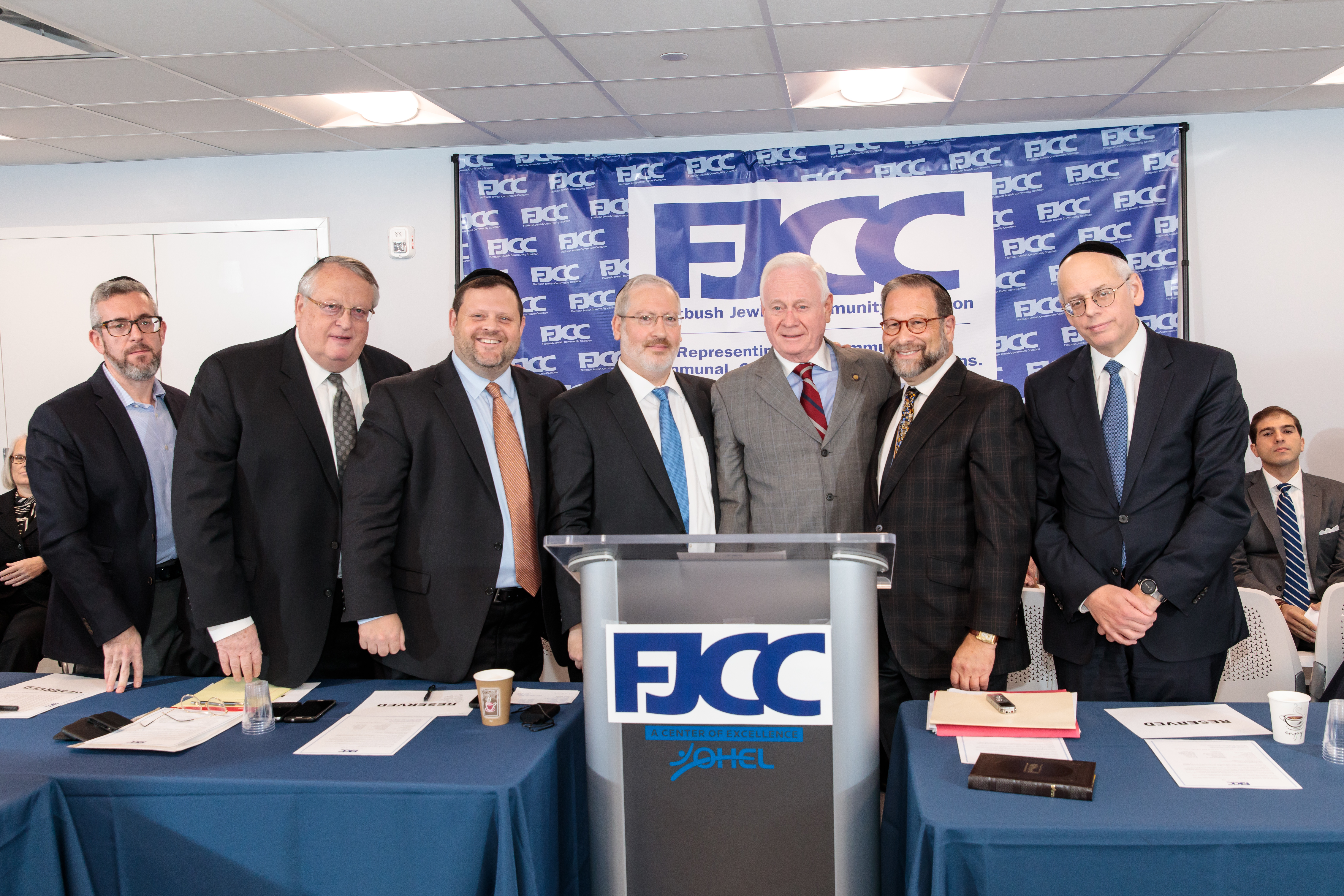 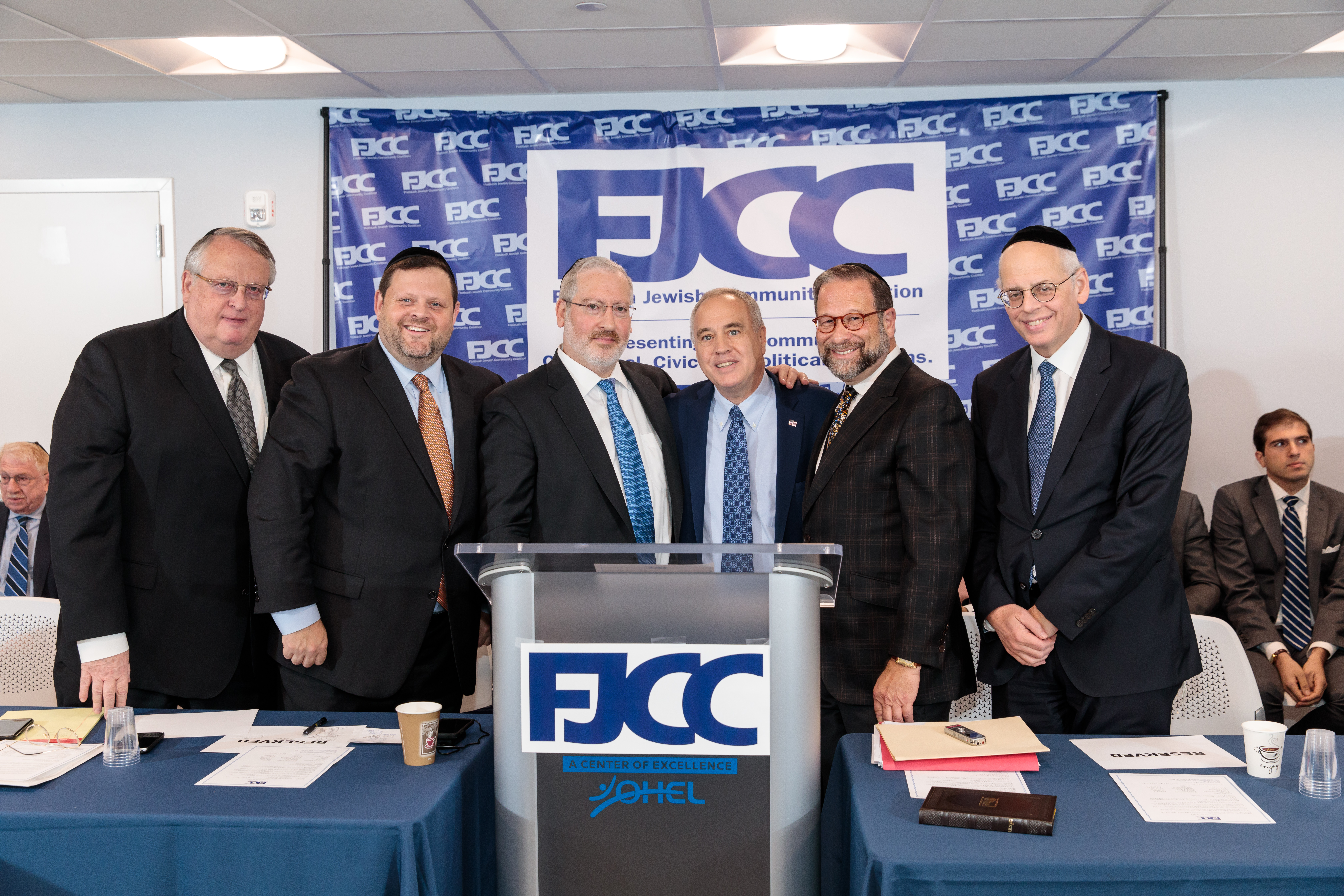 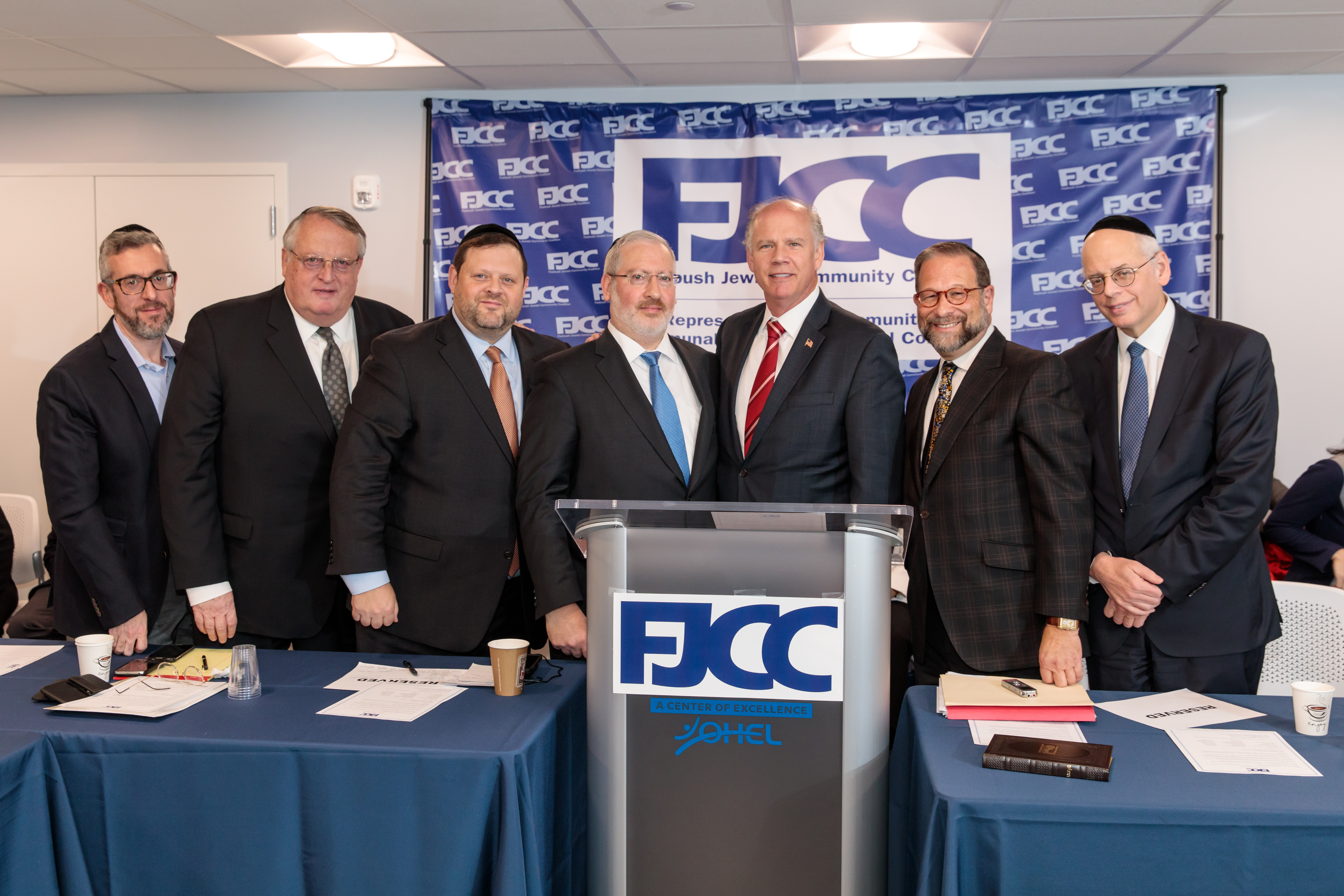 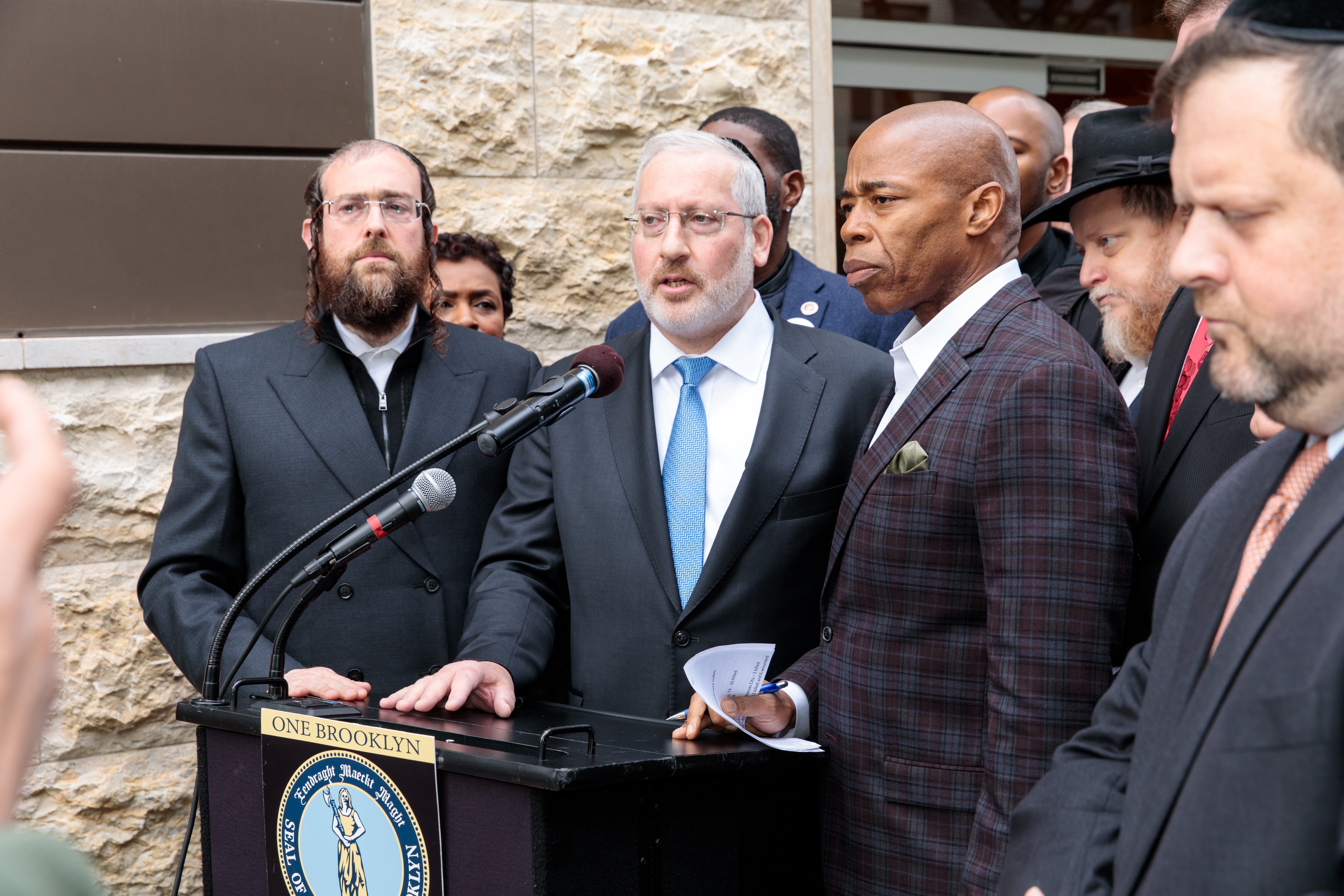