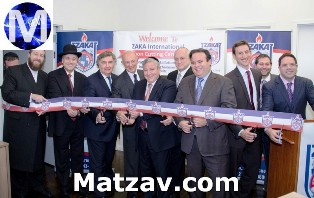 [Video below.] A room full of dignitaries, political and religious leaders, and activists watched last Sunday as renowned investor and philanthropist Meir Gurvitz was inaugurated as the Chairman of Zaka International. In a brief yet symbolic ribbon cutting ceremony, friends and supporters of Zaka wished Gurvitz well as he embarked on this vital and holy mission. The event was coordinated by The Friedlander Group. 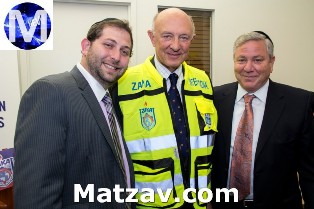 While Zaka was originally founded 24 years ago to deal with the grim realities of terror attacks, it has grown to encompass several divisions including mortuary, medical, missing persons and canine units. With over 2,800 volunteers in 15 countries, Zaka’s other units include dive teams, a hazmat team, an autopsy prevention team and a search and rescue unit.

Zaka has been internationally recognized numerous times, with a member of the British Parliament recommending that Zaka be awarded the Nobel Prize in 2003 and being acknowledges two years later by the United Nations as an international humanitarian volunteer organization. Since then, Zaka has been called in during times of crisis on many occasions, including the Hurricane Katrina rescue efforts, the terror attack in Mumbai, and the 2010 earthquake in Haiti. Most recently, Zaka members took part in a five day training exercise that simulated an EF5 tornado in Bloomington Indiana, together with members of the Israeli Defense Force, the Indiana National Guard, the United States Air Force, the United States Marine Corps, the Department of Homeland Security, the Federal Emergency Management Agency and several other local agencies, giving other groups an opportunity to see how Zaka operates and the extraordinary dignity exhibited by Zaka members when dealing with human remains.

“The New York office, created this past summer, will be the primary coordination office, both financially and operationally, for all of Zaka’s various components

worldwide,” said Zvi Gluck, director of operations for Zaka International, opened the program. He introduced Rabbi Joseph Potasnik, Executive Vice President of the New York Board of Rabbis, who thanked Zaka “for doing what you do. Because if you wouldn’t do it,” he added, “who would?”

Malcolm Hoenlein, Executive Vice Chairman of the Conference of Presidents of Major Jewish Organizations, pointed out that the work of Zaka “is really the highest mitzvah.” He thanked Meir Gurvitz for accepting the esteemed position at the helm of Zaka International here in New York.

Yotam Goren, Permanent Mission of Israel to the UN, also wished Meir Gurvitz well, saying, “As an Israeli, I know all too well the important work that Zaka does.”

Menachem Langer, Board Member of Zaka International added, “I’ve seen Zaka’s work firsthand and always admired their work, their courage, and their efforts.” He also recognized the diligent work of Zvi Gluck and thanked Chairman Gurvitz “for leading the way.” Fellow Board Member Akiva Grunewald participated in the ceremony as well.

James Woolsey, former CIA Director, one of several speakers who addressed the crowd, described Zaka as “a remarkable institution that embodies the Jewish community’s sense of service to the rest of the world and does so in a beautiful, self-sacrificing and noble way.”

Recalling his own positive experiences with Jewish neighbors as a child, Woolsey who was raised as a Presbyterian, expressed his thoughts about the shared relationship between Jews and Christians.

“Our sense of partnership and collegiality for most of us with the Jewish community here and I would say in Israel, is an extraordinary bond and one that many

others treasure and cherish a great deal.”

Rabbi Elie Abadie, spiritual leader of Congregation Edmond J. Safra in New York City, called Zaka International’s work a true “m’lechet hakodesh — holy work” Their unfortunate job,” he said, “is very sacred in our Jewish belief.” He wished them “hatzlocha rabba,” and added “May they not be needed. But if needed, may they be there.”

Zaka has been at the forefront of rescue and recovery for over two decades, and has earned the respect and admiration of the world community. The installation of Meir Gurvitz will no doubt raise Zaka and its mission to even greater levels of achievement. Zvi Gluck warmly welcomed him to the organization saying, “Meir will bring his leadership, his expertise, his humanitarianism, and his philanthropic skills to Zaka International.”

In his response to the warm greetings, Gurvitz recounted the dramatic tale of his first encounter with rescue and recovery work. “I was an eighteen year old Yeshiva student during the Yom Kippur War,” he said, “and I decided to volunteer with the chevra kadisha.” Gurvitz was assigned to the Sinai desert where he helped retrieve the remains of Israeli soldiers from their smoldering tanks. It was an experience that would make a tremendous impression on him. “This,” he pondered, “may be the incident that led me to take upon myself this present position.”

Gluck has been a volunteer with Zaka for the past nine years and plans on joining a mass training exercise with the IDF this weekend in Israel. He hopes to put his

firsthand experience to use with Zaka International as its director of operations.

Shortly after the ribbon cutting, Zvi Gluck summarized Zaka International’s many worldwide activities. He also discussed the organization’s ambitious plans for the future. “Our dream,” he said, “is to create a real coalition of community leaders, religious leaders, activists, medical personnel, former military personnel, young leadership, and people who will support us so we can continue our vital mission to assist all of humanity around the world.”