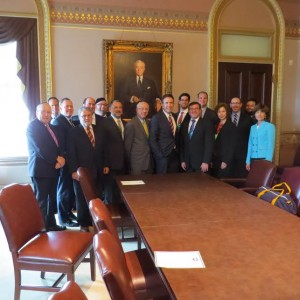 In the aftermath of Operation Protective Edge, during which Hamas terrorists launched indiscriminate rocket attacks against Israel and Israel endured unwarranted criticism from many in the international community, the state of the U.S.-Israel relationship is as important as ever before. As the diplomatic efforts to curtail Iran’s nuclear weapons ambitions continue, it is essential that Israel’s legitimate concerns about its safety and security be duly addressed. With global anti-Semitism increasing at a rapid and frightening pace, the effort to combat the hatred is absolutely vital.

It was against that backdrop that the National Council of Young Israel’s (NCYI) Executive Board traveled to the nation’s capital on September 10, 2014 for its Leadership Mission to Washington, DC. Hailing from California, Florida, and various cities up and down the East Coast, the Young Israel leaders spent the day interacting with White House officials and key lawmakers in Congress.

The day began with a special White House briefing that was organized by Matt Nosanchuk, Director of Outreach for the National Security Council and the Obama administration’s liaison to the Jewish community, at which time the Young Israel mission participants were updated on a number of important issues.

Two senior staff members from President Obama’s National Security Council (NSC), Maher Bitar, Director for Israeli and Palestinian Affairs at the NSC, and Nitin Chadda, Director for Iran at the NSC, provided timely information relating to Israel’s security needs in the wake of Hamas’ attacks on Israeli citizens, continuing peace discussions between the Israeli government and the Palestinian Authority, the status of negotiations over Iran’s nuclear capabilities, the troubling situation with regard to Turkey, and the emergent threat posed by ISIL.

In addition, Stacy Bernard Davis, Senior Advisor for the U.S. Special Envoy to Monitor and Combat Anti-Semitism at the U.S. Department of State, made a presentation about government-to-government discussions relating to the shocking rise in anti-Semitic attacks on European Jewish communities, as well as engagement with the Jewish communities themselves.

The Young Israel mission participants then traveled to the U.S. Capitol, where they were addressed by Senators and Representatives that play a formative role in constructing legislation to enhance the relationship between the United States and the State of Israel.

Senator Robert Menendez (D-NJ), Chairman of the Senate Foreign Relations Committee, discussed his efforts to impose new sanctions on Iran in order to keep the Iranian government honest and curtail its illicit enrichment program. “Under no circumstances can Iran be allowed to possess a nuclear weapon,” said Senator Menendez.

Senator Menendez also spoke about his staunch support for the State of Israel. “I believe that Israel has the right to defend itself, just like any other country in the world,” he said. “I will continue working to keep Israel safe and secure.” The Senator decried Palestinian Authority President Mahmoud Abbas’ marriage to the terrorist group Hamas and noted that he is exploring the imposition of financial consequences in response to the PA’s actions.

Referring to his feelings about the BDS movement, Senator Menendez made his position extremely clear. “Any talk about boycotts of Israel are condemnable by me,” he said.

Senator John McCain (R-AZ), a senior member of the Senate Foreign Relations Committee, was unequivocal in conveying his sentiments about a nuclear Iran. “We cannot look at Iran in a vacuum,” he said. “It’s not just about nuclear weapons; they pose threats all over the region.”

“Iran remains the single greatest threat as a nation, as far as I am concerned,” added Senator McCain.

Senator McCain also expressed his strong support for Israel and noted his disappointment in the European reaction to the conflict in Gaza. “We’re seeing neo-fascist activity in Europe,” he said.

In addition, Senator McCain spent some time discussing ISIS and the threat that ISIS poses to the United States and Israel.

Senator Ben Cardin (D-MD), who serves on the Senate Foreign Relations Committee, emphatically stated that, “[t]here is no moral equivalency between what Israel was doing to protect innocent lives and what Hamas was doing to kill innocent lives.” Senator Cardin told the Young Israel leaders that he wants the United Nations to investigate Hamas’ actions and stop focusing all of its attention on Israel.

Noting that, “Iran does not want to give up their nuclear weapons ambitions,” Senator Cardin declared that Israel is absolutely right to say that they have no confidence in Iran. On the issue of sanctions against Iran, the Senator noted that sanctions brought Iran to the table. “They are critically important and they must be strengthened,” he said. “We need to keep the pressure on Iran.”

“I feel a natural affinity and connection to the State of Israel,” said Congresswoman Ros-Lehtinen. “I will always voice my support for Israel’s right to defend itself.”

The Congresswoman denounced Hamas’ use of civilians as human shields in an attempt to have the world condemn Israel. “Israel warned people in Gaza to get out; Hamas ordered them to stay,” she said.

“We need to show Israel’s enemies that the United States stands steadfast with Israel and our support for Israel is strong and unwavering,” said Congresswoman Ros-Lehtinen. “As long as America is strong, Israel will be strong.”

The National Council of Young Israel also heard from Rep. Eliot Engel (D-NY), the Ranking Member on the House Foreign Relations Committee, and Rep. Adam Schiff (D-CA) about the terrorist group ISIS in advance of President Obama’s address to the nation about ISIS that was to take place later that evening.

“ISIS is a direct threat to U.S. national security,” said Congressman Engel. “If we don’t get them, they will get us.”

Congressman Schiff noted the important role that Arab countries such as Saudi Arabia, Qatar, and Kuwait can play in combatting ISIS. “They need to tell the Muslim world that this is not Islam; its savagery,” he said.

Rep. Brad Sherman (D-CA) discussed the issue of Iran and talked about the ramifications of a nuclear-armed Iran. “You get terrorism with impunity from Iran,” he said.

Congressman Sherman also offered his thoughts on Hamas’ actions during its latest conflict with Israel. “Hamas’ goal is the maximum number of deaths on either side,” he said. “They ask, how many funerals can we throw? Body bag counting is not a moral substitute for sound analysis.”

“Every rocket fired by Hamas at an Israeli city is a separate war crime,” said Congressman Sherman.

The Young Israel mission participants were also visited by Rep. Brad Schneider (D-IL), a member of the House Foreign Affairs Committee and long-term activist within the Chicago Jewish community, who discussed the unbreakable bond between the U.S. and Israel. “Congress stands together with a single voice for support for Israel,” said Congressman Schneider. “We need to hold the Palestinian Authority and Hamas accountable,” he added.

On the issue of Israel’s security, Rep. Matt Salmon (R-AZ) told the Young Israel mission that, “Israel has the right to defend itself.” Referring to Iran, Congressman Salmon said, “[w]e need to eliminate the possibility of developing a nuclear weapon in Iran – to me, that’s non-negotiable.”

“In light of the numerous challenges facing the State of Israel and Jewish communities across the globe, it is critical that the American Jewish community make its concerns known on Capitol Hill and take steps to ensure that our voices are heard by the decision-makers in our nation’s capital,” said NCYI Chairman of the Board Bob Levi. “The National Council of Young Israel is greatly appreciative to the Obama administration and the Members of Congress for meeting with us and engaging in an honest and constructive dialogue on the issues that matter most to our constituents and our brothers and sisters in the State of Israel.”