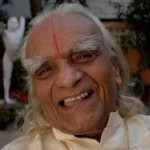 The man credited with bringing yoga to the West and transforming it into one of the world’s most popular exercises has passed away at age 95. B.K.S Iyengar died Wednesday of heart failure, after surviving malaria, typhoid, and tuberculosis as a child.

The man who transformed the world of yoga credited it with saving his life. He began practicing yoga in 1934, but he developed a more accessible version with foam blocks and straps to increase stretching. That modified version spread throughout the West and help him develop a celebrity following. Read more at The Telegraph.

Leave a Reply to Josh from Brooklyn Cancel reply