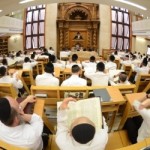 Some 10,000 full-time avreichim received on Sunday their last-ever government stipend, ending a tradition that has been extant for 33 years. Since 1981, students who learn in yeshiva full-time have received around $1,000 a month, depending on family size, to help support their families, Arutz Sheva reports.

The legislation for the stipends was prepared by former United Torah Jewry MK Menachem Porush z”l in response to the difficult economic conditions full-time students often found themselves facing. Most of the students had received exemptions from IDF service, but were also prohibited from working part-time.

Arutz Sheva added that MK Meir Porush said that his father had “acted with great self-sacrifice 33 years ago to legislate the law providing stipends for yeshiva students. Only a new government will be able to introduce that legislation again, which some 75,000 small children are dependent on. Just in the last year thousands of families have been brought to poverty levels as the government has taken the last piece of bread from their mouths. All this because of hatred of those who learn Torah.”