The bochur, 23-year-old Dovid Medvedev, was born in Russia and was raised and cared for by Rav Yissochor Rothschild zt”l of Lakewood, NJ, and his Rebbetzin. With immense dedication, they nurtured the Russian national as he grew into a ben Torah.

This past year, Dovid traveled to Eretz Yisroel to continue his learning at Rav Kaplan’s yeshiva in the Ezras Torah section of Yerushalayim. However, Dovid, having apparently overstayed his visa in the United States, was going to encounter major obstacles in returning to America. He had planned on heading to Beth Medrash Govoha in Lakewood, where he wished to continue his learning. 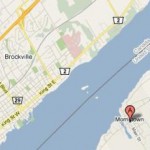 Dovid arrived in Canada from Eretz Yisroel on October 30 and spent several days in Ottawa before travelling to Brockville by taxi. Dovid then utilized a scuba suit to swim from Brockville, in eastern Ontario, to neighboring Morristown, in New York, crossing the Canadian-US border.

Dovid stopped someone and asked for directions to a nearby hotel. An employee at a convenience store on Route 37 in Morristown contacted police claiming to have seen a “suspicious-looking man carrying a large backpack.” Dovid was arrested by New York State troopers sometime after 11 p.m.

Dovid has been charged with illegal entry, but the greater concern at this time is what lies ahead for Dovid. He has been cared for most recently by Rebbetzin Tamar (Rothschild) Epstein and her husband, Rav Kalman Epstein, rosh yeshiva of Yeshiva Shaar Hatorah of Queens, who has been visiting Dovid several times a week.

May this yeshiva bochur, whose years of youth involved much turmoil and tribulations which he overcame, have the strength to endure the great challenge he currently faces as he sits behind prison bars.