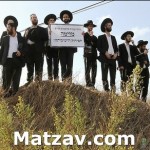 An Israel yeshiva bochur, Shmuel Eizik Gabay, a talmid of Yeshiva Shaarei Torah Breslov, has been in Prison Six in Israel since last Tuesday.

The story began when the bochur got a call from the IDF recruitment office and was told to go down to the recruiting office in Yerushalayim. Shmuel Eizik went down and was told that he had been recruited for the army, having delayed a week in going down to the office.

He asked not to be enlisted due to his desire to stay in yeshiva and the judge sentenced him 20 days in Prison Six. The judge stressed to him that as soon as he signs that he is enlisting in the Israeli army, he will be released.

The bochur, who is said to be a diligent ben Torah, had never received a draft notice before. He is now in a jail with, largely, secular youth.

“A yeshiva bochur cannot be in a jail, because of the mentality of the secular and the hostile environment here,” he remarked.