The Yerushalayim Municipality has replaced dozens of plastic garbage bins with noncombustible metal ones, this after recurring riots in protest of the annual toeivah parade have cost the city more than a million shekels over the past five years. During the past few weeks, the new garbage bins have been dispersed throughout the chareidi neighborhoods of Meah Shearim, Geulah, Kerem Avraham and Shmuel Hanovi, where demonstrations have been held against the municipality and the local police’s decisions, including the authorization of the toeivah parade.

An additional 200 metal bins are expected to be placed throughout the city over the next few weeks. 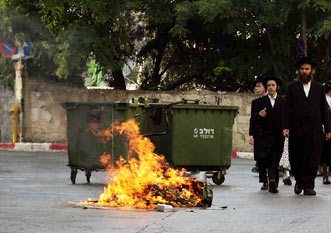