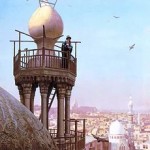 Talk about being creative.

Like thousands of others, the residents of the northern Yerushalayim suburb of Pisgat Ze’ev have long suffered from the loud mosque muezzins calling Muslims to prayer in the early hours of the morning.

Pisgat Ze’ev resident Yaakov Cheftzadi turned the tables on them by setting up powerful loudspeakers on his balcony and broadcasting the early morning Selichos being recited at the Kosel.

Beforehand, Yaakov announced, “Good morning, it is 5:40 in the morning. The Arabs think they are about to make things noisy for us. Look what we’re doing to them.”