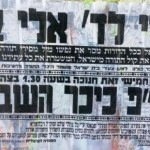 Hundreds of thousands will attend a massive atzeres tefillah today in Yerushalayim in light of the Israeli government’s enlistment bill forcing lomdei Torah out of the bais medrash and into the IDF.
The event will take place at the entrance to Yerushalayim. “The Million Man Atzeres,” as the event is being called, will cause the main entrance to Yerushalayim to be closed to private vehicles from noon and public transportation from 2 p.m. Police urge citizens to refrain from reaching the area.

The asifa will not include any speeches. Instead it will include Tehillim.

Several national-religious rabbis and Bayit Yehudi MK Motti Yogev have already said they would take part in the rally.

Last night, Bayit Yehudi leader Naftali Bennett called on his party members to refrain from attending the asifa, saying that the enlistment bill is good for the nation.

Bennett explained: “You won’t find any mention of criminal sanctions in the bill. Those who shout that there is a need to speak up, know that no yeshiva student will be sent to jail. The bill is fair. Military service is not an edict, it’s a mitzvah.”

MK Motti Yogev, who will join the rally, said, “I did not ask anyone’s permission to attend. We are not a dictatorship like the Yesh Atid party. Ofer Selach insists on spiting the charedim and I feel it is my responsibility to protest that.”