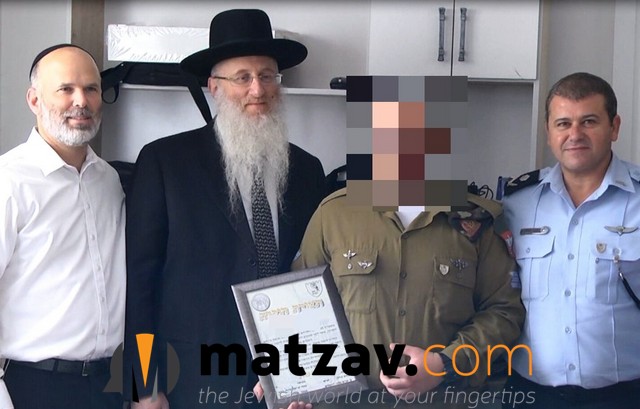 In a modest ceremony  held at the Mezudat Edomim Border patrol base, chief of the Yerushalayim district of the Israel police Moshe (Chico) Edri granted a certificate of merit and a medal to the Nachal Charedi soldier who neutralized a terrorist in the Romema neighborhood in Yerushalayim a month ago.

The ceremony was held with the participation of both the President of the Nachal Charedi Foundation, Rabbi Tzi Klebanow, and the Foundation’s director, Colonel (Res.) Yonatan Branski.

During the ceremony, the chief of district awarded the soldier with a Yerushalayim district police pin and praised him for his actions and his rapid response, which allowed the neutralization of the terrorist.

Edri added that “your actions met our expectations – to mobilize against the enemy and neutralize them. The most professional thing you did, in my opinion, is that you were also able to manipulate your weapon during the event. This is what we call an act of professionalism, an act of caring, and exemplary citizenship.”

Edri also noted the courageous and determined activities of the Israeli policemen against terrorism and for the sake of public security, before thanking the soldier once again for his actions. “I would like to say thank you for what you did and for how you acted. You did a heroic act.”

Colonel Branski spoke at the ceremony, saying that “this transition from zero to one hundred in a just one second while manipulating the weapon…is unfortunately something that is expected from every civilian and certainly from a Netzach Yehuda combat soldier. I definitely think that you have brought a lot of respect to the battalion and that you serve as a personal example for many soldiers and civilians who happen to find themselves in scenes of terror attack. That is how they are expected to respond and it’s not obvious. A big yasher koach to you.”

The soldier’s name has not been released due to security reasons. During the ceremony, the soldier said that he got suspicious after noticing that traffic has stopped on the street and that people were running in panic from the area. He got off a bus and approached the scene, where he noticed the terrorist trying to stab civilians. At one point, the terrorist noticed him and rushed to attack him. In response, the soldier cocked his weapon quickly and neutralized the terrorist within a few seconds. 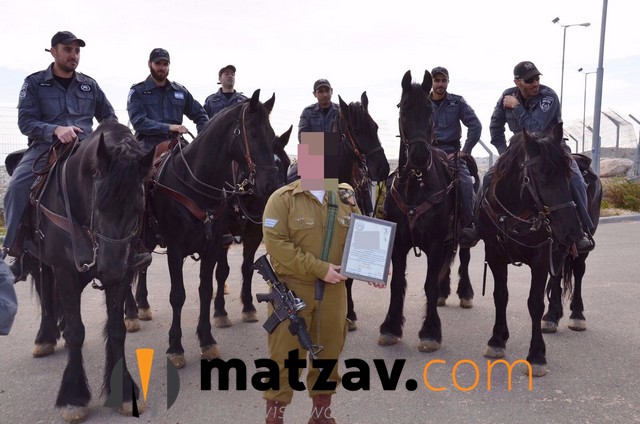