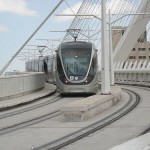 The company that runs the Yerushalayim light rail system, City Pass, says that 40 percent of the system’s cars are in need of repair due to rock throwing from the predominantly Arab neighborhoods in the eastern part of Israel’s capital.

City Pass said its fleet of 23 cars has been effectively reduced to 14. The number of rock attacks has overwhelmed the company’s mechanics, leaving administrators with no choice but to cut back on rail service.

The Yerushalayim light rail suffered its most extensive damage during the summer, when rioters firebombed stations to protest the murder of Arab teen Muhammad Abu Khdeir.