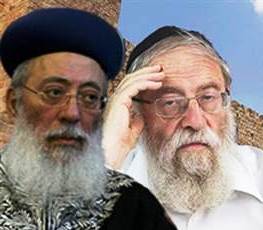 After more than a decade without a chief rabbi, Yerushalayim finally has two new ones.

A 48-member electoral body of 24 representatives from the

Results were announced just before the 8 p.m. deadline.

Rav Aryeh Stern  was voted in as Ashkenazic Chief Rabbi with 27 votes.

Yerushalayim Mayor Nir Barkat said after the results were released that “Yerushalayim is in the hands of Zionism. Bayit Yehudi blesses the Chief Rabbis of Yerushalayim, Rav Aryeh Stern and Rav Shlomo Amar, on their election. This is a great victories for the lovers of the nation of Israel, the land of Israel and the Torah of Israel.”

Leave a Reply to Truth be told Cancel reply