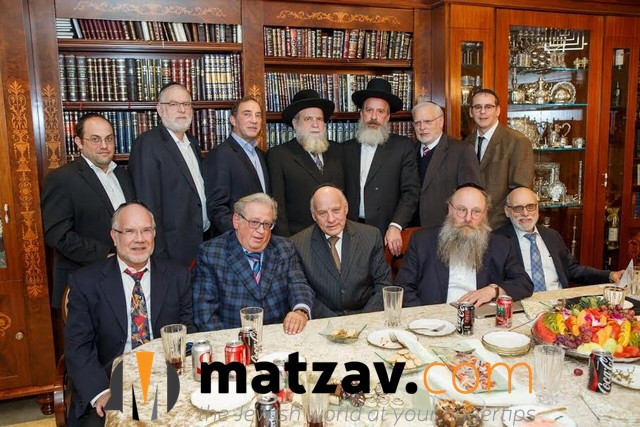 “Had we heeded the warnings from this Committee five years ago about the rock throwing on Har Hazeisim, we may not have faced the current security crisis in Jerusalem,” was the essence of a strong message delivered by Rabbi Yosef Deutsch, First Deputy Mayor of Jerusalem (Yahadut Hatorah) at a reception in his honor on Monday at the Midwood home of Meilech Fastag, a member of the Executive Committee of the International Committee for the Preservation of Har Hazeisim (ICPHH). Rabbi Deutsch said that a tough response on Har Hazeisim would have sent a clear message that violence will be met with a strong response. He acknowledged that while some measures were taken by the Government to secure Har Hazeisim, including the installation of surveillance cameras and the establishment of a police sub-station, “it fell short of exercising full sovereignty over the holiest and oldest Jewish cemetery and the neighboring Arab communities.”

In his meeting with members of the Committee, Rabbi Deutsch promised to promote the ICPHH agenda of building a wall and a Visitor’s Center as important projects to secure Har Hazeisim and establish Jewish sovereignty over the 3000-year old cemetery with its 150,000 neshomos, many of them some of the luminaries of the Jewish nation. “We must be able to secure visitors and mourners at any time of day or night without fear just as it was after the Six-Day War of 1967, ” he said. In his introduction, Menachem Lubinsky, co-chairman of the ICPHH, said that while all of Jerusalem and Israel may be under attack, “we have a responsibility for kavod hameis, to protect the resting place of so many kedoshim.” He praised the Deputy Mayor for his strong stance in support of the security on Har Hazeisim. Avrohom Lubinsky, chairman of the ICPHH, revealed that the “ICPHH was planning a series of steps to secure the holy cemetery, including a fresh round of meeting with leading members of the Israeli government.”

Rabbi Moshe Tuvia Lieff, the Moroh D’Asroh of Agudas Yisroel Bais Binyomin, called on the Deputy Mayor to take a lead role in securing Har Hazeisim. Rabbi Lieff’s father and many members of his family are buried on Har Hazeisim. Rabbi Deutsch said that he would continue to be a strong advocate for securing our “national treasure.”

Mr. Lubinsky revealed that a delegation of the ICPHH would soon head to Israel to meet with key government officials on a host of issues that pertain to the security of Har Hazeisim. Rabbi Deutsch invited the group to meet with leaders of the municipality.

The International Committee for the Preservation of Har Hazeitim – Mt. of Olives (ICPHH) was founded in May 2010 after a report by Micha Lindenstrauss, who was then Israel’s State Comptroller. He criticized all previous governments for the “neglect” of the Mt. of Olives. The ICPHH includes representatives of a cross section of American Jewry, including Malcolm Hoenlein, the Vice Chairman of the Conference of Presidents of Major American Jewish Organizations, who has been a key member of the leadership of the ICPHH. The ICPHH has chapters in the USA, Canada, Israel and in Europe.

Since its founding in 2010, the Committee has managed to persuade the Israeli government to install 142 surveillance cameras, to establish a new police substation, to restore 20,000 destroyed graves, to construct new fencing, and to arrange for regular sanitation and garbage removal from the previously garbage strewn cemetery. Despite these improvements, stone throwing at visitors continues and graves are still being desecrated. Jewish sovereignty over the area is being questioned and challenged by Arabs and other world entities despite its 3000-yaer history and the burial site of more than 150,000 Jews, dating back to the era of the Nevi’im.