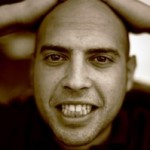 A hostile rider on a motorized scooter almost hit a Dutch Jew walking down a street in The Hague on Friday evening, while other passersby called him a “cancer.”

He filed a complaint with the police over the attack, noting, “That’s why I stopped over a year ago with wearing a yarmulke.”

The incident happened during the filming of a documentary report for the EO TV program 3Onderzoekt. For the report, Schomberg strolled through one neighborhood on Friday night, wearing a yarmulka.

“A boy drove me on his scooter and tried almost to kick me. I jumped back in the nick of time. Yes, it’s all on camera,” he said.

Schomberg said he was organizing a solidarity march this coming Saturday, in protest over the unsafe situation for Jews.

“In Sweden, they have also protested against anti-Semitism,” he noted.

In late July, the Jewish human rights group The Simon Wiesenthal Center called on Dutch Prime Minister Mark Rutte to rescind approval for a rally in support of ISIS in the Hague, after protesters, yelling in Arabic and Dutch, proclaimed that “dirty Jews from the sewers” should be killed. Police did not intervene.

According to Holland’s AT-5 News, “There has never been so much anti-Semitism on the Internet.”

Watch the video of the hostile encounter HERE.

Read more at The Algemeiner Journal.