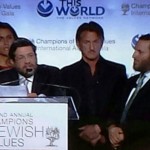 Yanky Ostreicher on Sunday appeared with actor Sean Penn for the first time since his release from a Bolivian jail. Presenting Penn the Champion of Jewish Justice Award at the Second Annual Champions of Jewish Values International Awards Gala in New York Sunday evening, Ostreicher described his prison ordeal and showered words of praise on Penn, who actively sought his release.

“This is not the story you expected to hear about the anti-American, Jew-hating, communist-loving Sean Penn,” Ostriecher told the crowd of 700.

Ostreicher recalled his time at Palmasola prison in Bolivia and the moment Sean Penn came into the picture to save his life:

“Not only was I the only Jew, I was the only American. I didn’t speak a word Spanish, all my possessions were stolen from me, I was in prison for a crime I didn’t commit and worst of all I was away from my family and loved ones.

Speaking of his hopelessness at the time in the Palmasola prison, Ostreicher said that when he closed his eyes at night, he prayed “this should be my last prayer.”

But after 6 months and 17 days Sean Penn came into the picture. “I saw this man, not dressed in a suit and tie – Hollywood style, but rather like somebody ready for battle. He walked forward and gave me this firm handshake and said ‘Hi Jacob, my name is Sean Penn.’ I was less than 110 lbs. at the point, barely strong enough to hold my own body, and Sean’s first question was ‘when was the last time you saw a doctor?’ .. As the police watched on every move, Sean leaned in and whispered: ‘Jacob, don’t worry. Stay strong. Not only do I know that you’re innocent, but I’ve spoken and met with the president and they all know you’re innocent too.’ ”

“That very same night, at 1 o’clock in the morning, Sean came back, this time with a doctor by his side and within 48 hours he had me transferred to the hospital. Over the next six months, Sean managed to get miracles happen. As my health started to recover, he traveled back and forth to Bolivia setting into motions and series of hearings that eventually exposed and national ring of corruption that resulted in the indictment and arrest of more than 28 high government officials. And eventually Sean managed to get me transferred from prison into house arrest.”

“I can’t go into all the details of the next year and a half how difficult the road to freedom was and how many times Sean saved my life. But I can say he literally dropped everything for a fellow American half way across the planet, even to the point that Sean himself had to flee Bolivia, not for fame and fortune. In fact, when Sean was first told about my situation he only knew two things about me: That I was an American and that I was an Orthodox Jew. And Sean only asked one question before he flew out to Bolivia. He didn’t ask if I was a Democrat or a Republican. He only asked ‘is he innocent?’ ”

Ostreicher also thanked Rabbi Zvi Boyarsky of the Aleph Institute, who was ‘pivotal’ in his rescue, congressman Chris Smith, the law forms that worked relentlessly to prove his innocence and pave his way to Freedom, and the 100′s of thousands of people from our community and beyond “who were praying for me and working for my freedom.”

Ostreicher went on to thank “two people that I know who they are” who rescued him from captivity.

Ostreicher further recounted the day his foot stepped on American soil. “Sean put me up in a 5-star hotel and then he brought me into his home, gave me a warm bed, a refrigerator stocked with kosher food and told me ‘Jacob, my house is your house.’ He even took me to synagogue and sat by my side as I attended Friday night prayer services for the first time in 3 years.”

“Sean sat with me for hours, sometimes sit with me all night, saying quietly ‘stay strong, Jacob, giver yourself some time.’ And more than just staying with me, he helped me start reconnecting with my family. . He gave me his white shirt, black suit and black shoes.” He then spoke of the first time he reconnected with his daughter and grandchildren.

“I would like to say everything is fine, No! I still have a long way to go. From time to time freedom and liberty continues to overwhelm me, but that’s the story… one of the best stories,” Ostreicher concluded.

“I saved Jacob Ostreicher because we are obligated to do so,” Penn said in his speech.