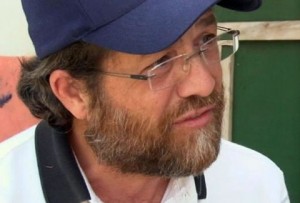 Yidden the world over continue to follow the saga of Yanky Ostreicher, whose story is already being described by the media as being fit for Hollywood – complete with a major movie star, unclear reports of a kidnapping, and a Jewish American fugitive sneaking across the border of a far-away nation unfriendly to the United States.

Except that it is not a film script, but the real life tale of one of our own, a fellow member of Klal Yisroel.

The story is still murky, however. It is not known just how the 54-year-old father and zaida fled from house arrest in Bolivia and landed in the United States in the care of actor-activist Sean Penn.

Even Yanky’s own family members have been surprised and shocked – while of course elated. They say they were unaware of the operation that brought their father back to American shores.

No one is saying how Yanky fled or who helped him, and according to some, we may never learn the whole story.

“You’ll never find out,” Peter Hakim, president emeritus of the Inter-American Dialogue in Washington, said Tuesday according to the Associated Press. If the U.S. was involved, “it was done through layers and layers of cover,” he said.

Yesterday, Matzav.com reported that Bolivian Justice Minister Cecilia Ayllon said that Yanky may have fooled authorities at an unspecified border crossing Sunday night before boarding an LAN Chile plane in the Peruvian capital of Lima for a flight to Los Angeles.

Penn did say in a statement that a “humanitarian operation” had been mounted to extract Yanky “from the corrupt prosecution and imprisonment he was suffering in Bolivia.” Penn didn’t provide additional details or say who was behind it. Penn had traveled last year to La Paz and appealed directly to Bolivian President Evo Morales to free Yanky.

Meanwhile, while the State Department confirmed Yanky’s arrival but wouldn’t say much else, Bolivia’s government officials are expressing outrage over Yanky’s escape and are warning that they could seek his extradition.

Many people are not sure what to make of the Bolivian officials’ comments. Are they genuine? Are they just playing along? Did they actually know something and are just saving face by expressing outrage?

As Hakim said, we may never know the whole narrative.

Some experts are conjecturing that because of the high profile of the case, including a hearing on Capitol Hill led by Congressman Chris Smith to bring attention to Yanky’s plight and an alleged extortion ring that reached into top levels of the Bolivian government, the chances of him being sent back to Bolivia are slim, if there is any chance at all.

Some are speculating that the entire “humanitarian operation” may have received a green light from the American government.

Again, it is all speculation.

As of this writing, it is still not known where Yanky is being held. Penn has said that Yanky is safe, doing well, and receiving medical attention at an undisclosed location. That is all that is known right now.

Penn is emerging as a courageous hero for his role in the Ostreicher case. It was thanks to his involvement that the Bolivian president first had an intensive investigation into the case conducted, uncovering an extortion ring that took advantage of individuals accused of drug crimes. Some fifteen people, include prosecutors and an adviser at the Bolivian Interior Ministry, were arrested.

Yanky told the Associated Press one year ago, “If it weren’t for Sean Penn, I would be another statistic in Bolivia and I would die in prison.”

We may never know the full story, but we, Yidden, still pray for Yanky’s wellbeing, hoping that, in the near future, he can be reunited with his wife, Miriam, and their children and ainiklach, and that he will be able to resume living as normal a life as possible.

And we offer a prayer of thanks to the Ribono Shel Olam for orchestrating such an astonishing and miraculous chain of events to bring one of His children to freedom.