[See note at end of article.] From a COLlive report: As the New York Yankees took their time winning an 8-6 victory against the Texas Rangers two weeks ago, Thelma Levy sat in the new Yankee stadium.The last time she watched a Yankees game was in 1934. The elder Levy vividly remembers watching the first baseman Lou Gehrig. “I went to Talmud Torah and they took us for an outing to the stadium,” Levy, 85, said flanked by her son, grandson and great-grandson who sported a Yankees cap. “Every morning I listen to the radio with my coffee to hear if the Yankees won or lost,” she told COLlive. “It never dawned on me that I would actually watch another game. And what is more amazing is the Kosher food.”

Yards away from her, one of the five blue concession stands was offering hot dogs, burgers, falafel, deli sandwiches and shwarma, all prepared according to strict kashrus laws. Ouri’s Sports Kosher Catering, the sole provider of Glatt Kosher food for the stadium, is supervised by OK Kosher Certification, led by Mrs. Levy’s son, Rabbi Don Yoel Levy.

“I was completely blown away by the kosher options they had,” said Evan Tuvia Galatz, 26, an accountant from Manchester, CT, who visited with a friend. 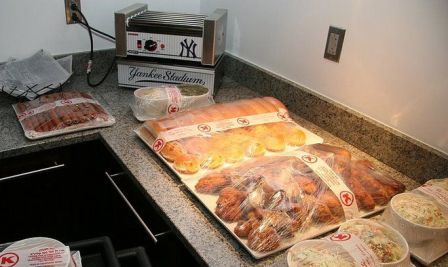 “For a real ballpark experience, they have kosher hot dogs. And no, not Hebrew National, real kosher hot dogs,” he said. “I went with their order of Chicken Fingers which cost $8 – same price as the regular ones around the stadium.”

An average game has a minimum of 7 to 8 mashgichim. OK’s Rabbi Naftali Marrus is credited with coordinating all the different elements of achieving the Kosher standard.

One of the backers of the Jewish makeover was Ike S. Franco, President and CEO of Franco Apparel Group, who is associated with the Yankees ownership.

“I still remember when I used to go to Prime Grill and miss half of the game, or go to Mr. Broadway and eat on the run,” he told COLlive.

Standing near Don Mosalsky, general manager of the Yankees’ VIP Legends, Franco commented: “This is like heaven. You sit in the lap of luxury, you have the best caterer around with 100 percent Kosher food and you watch your favorite team. This is not just a ball game but a vacation.”

Back at the field, at the 227 section of the stadium, Uri Kirshner, a 37 year-old lawyer from Wesley Hills, just missed a Maariv minyan that had ended moments before.

Asked about Ouri’s hotdogs and potato knishes, Kirshner said he appreciated the kosher service, but “I wished for more – not just all the same junk food.”

For those delicacies, he would have to pay for the VIP lounge, or get lucky like Danny Koshanfar, a fan for some 20 years, whom we found sitting in an exclusive suite his friend’s father rented for the game.

“We’ve been to many games, but never have we had such gourmet Kosher food,” Koshanfar said. “I wouldn’t have believed it unless I saw it.”

Rabbi Chaim Fogelman, a rabbinic coordinator for OK Kosher Certification, sees it in the same way: “It’s history in the making that Yankees stadium should have a designated Kosher kitchen.”

“We’ve gone a long way to instill the high standards of the OK. Glatt Kosher Chassidishe Shechita, Pas Yisroel baked goods and sealed pre-ordered meals,” he said while touring the stadium in a kippah and tzitzis.

Fogelman said “the upper management of the Yankees have worked very hard to satisfy the most meticulous Kosher consumer.”

Ouri’s Israeli-born owner Ouri Nidam, who worked as a chef in the Israeli Knesset, offers clientele an array of options from a private family viewing to a bar mitzvah that can host 400 people.

Like many others, Mrs. Levy couldn’t thank him enough. The stadium just cannot get more Jewish than this.

Note: Matzav.com does not endorse or condone going to baseball games. Each person should follow the direction of his or her rov, rebbi, rebbe or morah hora’ah. The above report has been posted here as a human interest piece relating to the Jewish community. We thank COLlive.com for the information and photos contained in the report.