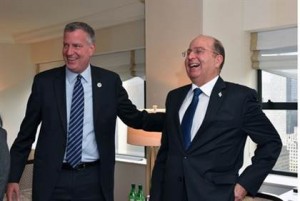 “We greatly appreciate your personal support for Israel; in your statements and in your attitude you give us moral and ethical support which are very important,” he told de Blasio. “The performance of Iron Dome, which was developed with the important assistance of the United States, was simply amazing during Operation Protective Edge. It was very impressive. We plan to improve the system and to reinforce it, so it can cover more territory in Israel, and also to develop additional layers of active defense, with the support of the United States…