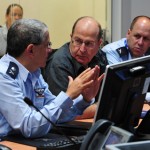 Israeli Defense Minister Moshe Ya’alon delivered a speech this afternoon, warning Hezbollah against exacting revenge for the death of Samir Kuntar, the Lebanese terrorist who was recently killed in December in airstrike attributed to Israel.

Addressing graduates of the Israeli Air Force’s prestigious pilots’ course in Hatzerim air base, located in the Negev, Ya’alon promised that should Hezbollah so much as attempt to avenge Kuntar, a man imprisoned in Israel in 1979 for murdering four Israelis, including a toddler, Israel would respond with a heavy hand.

“Our enemies know that if they even try to hit us we will strike back forcefully and we will do so in any way that we deem fit. That includes from the air, the sea and from the land,” Ya’alon said.