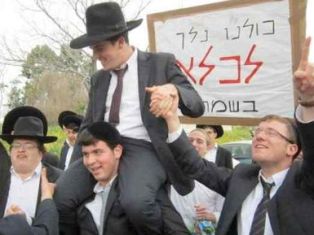 A yeshiva bochur who was jailed for failing to present himself at an IDF enlistment office for preliminary conscription processing was released today.

The 18-year-old bochur, Yaakov Yisrael Paz, followed the directive of Rav Shmuel Auerbach, who opposes any cooperation with the state regarding the enlistment of yeshiva bochurim and instructs yeshiva bochurim not to report to the IDF, even for the beginning of the bureaucratic process
Yaakov Yisrael Paz, who is from Ashdod, was arrested by military police and jailed at IDF Prison 6, near Chaifa.

A large crowd greeted Yaakov Yisrael as he left jail, and the bochur declared that sitting behind bars for the Torah Hakedoshah is “a kiddush Hashem.”

Yaakov Yisrael related that he was in a room with 22 other people and that he earned the respect of his prison-mates. He described his time at Prison 6 as “uplifting and inspiring.”