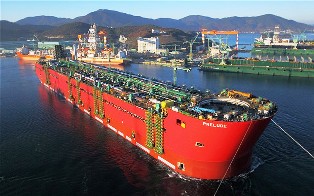 The largest floating vessel in the world has taken to the water for the first time in South Korea. At a length of 1,601 feet, the Prelude, which is owned by Shell, is 150 feet longer than the Empire State Building is high.

When fully laden the ship weighs approximately 600,000 tonnes and is 243 feet wide.

It is a floating liquefied natural gas facility which will allow Shell to produce natural gas at sea and then liquify it by chilling it to -260 degrees F so it can be transported around the world.

The Prelude is expected to produce 3.6 million tonnes of liquefied natural gas per year and its storage tanks have a capacity equivalent to approximately 175 Olympic swimming pools.

The facility will be connected to wells on the seabed by a series of pipes to extract gas from under the ocean.

The Prelude has replaced the Emma Maersk, which measures 1,302 feet, as the world’s largest ship.

After a year of construction the facility was floated out of the dry dock at the Samsung Heavy Industries (SHI) yard in Geoje, South Korea.

It is designed to withstand a category 5 hurricane and can be moored at sea during the most powerful cyclones with one of the largest mooring systems in the world.

A 93-metre (305-foot) high turret, spacious enough to house the Arc de Triomphe, will run through the facility and allow it to turn in the direction of the wind, absorbing the impact of strong weather conditions.

See more at THE TELEGRAPH.