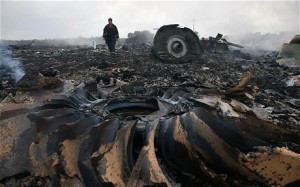 Barack Obama is facing perhaps the toughest calls of his presidency as pressure mounts for him to take concrete action over the apparent shooting down of Flight MH-17 over Ukraine, with 23 American citizens feared among the dead.

As the world waits for an official US verdict on who was responsible for downing the plane, defense hawks were already warning that there would be “h— to pay” if Russia or its separatist proxies in eastern Ukraine were to blame.

As reported earlier by Matzav, Senator John McCain, the former Republican presidential candidate who has long argued for a more robust approach to Russian meddling in Ukraine, warned that the US should now consider providing significant military support to the government in Kiev.

“If it was a missile that was launched either by Russia or the ‘separatists’ – which in my view are indivisible – this would have the most profound repercussions,” he told CNN.

“It would open the gates, finally, for our assisting the Ukrainians. Giving them some defensive weapons, sanctions would have to be imposed as a result of that, and that would just be the beginning.”

The near silence from both the White House and State Department on who was responsible for bring down the Malaysian Airlines flight only served to highlight the enormous stakes now in play for US-Russia relations.

Obama, on a speaking trip to Delaware, continued with his program, noting only that the crash was a “terrible tragedy” and pledging US assistance to find out what had happened to the aircraft, but giving no hint of which direction the US was leaning towards.

The White House issued a statement confirming only that Mr Obama and the Russian President Vladimir Putin – who later expressed his condolences for the dead – had spoken by telephone earlier yesterday morning as reports of the downed jet were emerging.

A statement from the White House said only that the two leaders had “noted” the event, but gave no further details, although analysts speculated that Mr Putin had used the call in a bid to pre-empt any unwanted escalation.

However the downing of MH-17 comes at a time when US-Russian relations are at their lowest ebb and after weeks in which the Obama administration has repeatedly warned of the dangers – and consequences – of Mr Putin continuing to ignore warnings over arming the rebels.

The crash also came a day after the US had announced a significant toughening of sanctions against Russia, opting to take the lead in inflicting economic pain on Moscow after weeks of unsuccessful lobbying of the European allies get tough with Mr Putin.

Read more at The Telegraph.