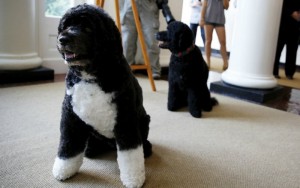 A man was arrested in Washington, D.C. after he allegedly planned to kidnap one of President Barack Obama’s Portugese Water Dogs, Sunny and Bo. Scott Stockert was arrested at a Hampton Inn with unregistered firearms and hundreds of rounds of ammunition.

It’s still not clear why the man, who claimed to be Yoshka and the child of John. F. Kennedy, was plotting the kidnapping.

Stockert allegedly told agents that he was in D.C. to advocate for $99-per-month health care and to announce his candidacy for president. Read more at NBC Washington.