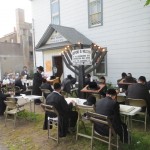 Woodbourne, NY – Historic Congregation Bnai Israel on Route 52 in Woodbourne closed its doors – at least officially – last Sunday, August 31st, on its fifth and most successful season yet. While last summer saw 80,000 mispallelim pass through the shul’s doors, regulars at the shul insist that the volume doubled this summer.

The shul, which had fallen into disrepair due to the changing demographics of the region, was revitalized in 2010 when Rabbi Mordechai Jungreis undertook the responsibility of maintaining the shul to service the public during the summer Catskills vacation season. The shul was immediately transformed into a major attraction that draws Jews from all over Sullivan County to catch a minyan and enjoy the warmth and hospitality that the Rebbe distributes freely to all who enter.

A number of people commented that since the Rebbe shlit”a makes it clear that he views the shul as property of Klal Yisroel and himself as a mere caretaker, they would like to hear an update about how the summer passed in “their” shul. The Rebbe shlit”a agrees and is glad to share this season’s activities.

Shacharis minyanim began at 7:20 AM each morning (7 AM on Mondays) and continued through the morning, melting into minchah which led into maariv in a continuous stream of prayer that ended in the wee hours of the morning. There was also a daily Daf Yomi shiur and a host of other shiurim over the week, including the ever-popular main Thursday evening shiur by Rabbi Moshe Meir Weiss shlit”a accompanied by generous helpings of steaming cholent.

Rabbi Jungreis remained on call virtually 24/7 to greet visitors and oversee the distribution of refreshments for all who stopped by. (The Rebbetzin begged people to have rachmanus on the Rebbe shlit”a, who is straining himself beyond his physical limits. Yet the Rebbe shlit”a insists that as long as people are coming by he will be there for them.) His presence is in attraction in its own right, as many people make sure to stop by for the Rebbe’s blessings for shmirah and brachah before leaving.

When asked what he has to say about this past summer in the shul, the Rebbe remarks that to him it’s all about the thousands who came to daven every day, the people who were able to sit down and learn for a few minutes before continuing on to their destination. It is about bringing together Jews from all stripes and walks of life in a setting where, as the sign outside the shul proudly proclaims, “EVERYONE IS WELCOME.” It is a location where everyone can take part in the Torah, Avodah and Gemilus Chasadim that are the Rebbe’s trademark.

Some people who experienced the warmth and enthusiasm that the Niklesburg Rebbe shares with all who enter have asked whether Rabbi Jungreis is in any way affiliated with Chabad. The Rebbe insists that, in keeping with the original name of the shul, Congregation Bnai Israel, the Woodbourne shul is entirely non-denominational and it is a place where everyone should feel at home in “your own shul.”

There were those who admitted that they were on the verge of taking the easy way out and daven minchah in private. The knowledge that whenever they arrived in Woodbourne there would be another minyan starting, however, gave them the push to go out of their way to daven with a minyan.

Another important feature of the shul of which the Rebbe shlit”a is especially proud is its unique “Kollel Mesirus Nefesh.” A group of 22 men gathered every morning from all over – one member arrived after 1 hour of hitching rides with various delivery trucks! – for 1 hour of learning before Shacharis. They were paid $100 per week, with the Rebbe shlit”a adding a dollar to the paycheck with each passing week in the spirit of “מעלין בקדושה ולא מורידין.”

The 95-year-old structure, which was designated a National Historic Place in 1999 at age 79, showed serious signs of strain last year, as some of the floor beams gave way. Its facilities also proved wholly inadequate for the incredible flow of travelers, of which the builders could not have dreamed in their wildest imagination back in 1920. As a result, Rabbi Jungreis undertook major renovations that kept him occupied throughout the entire winter and right into the beginning of the summer.

Fortunately, the work was completed during the first week of the shul’s seasonal reopening and mispallelim enjoyed the refurbished building and expanded facilities. And despite the improvements, the overflow crowds continued to use the great outdoors for minyanim, weather permitting. For next year the plans include further expansion of the Beis Medrash and renovations to modernize the upstairs. There will be even more men’s rooms to eliminate the lines that formed daily.

Even Shabbos, when travelers are not part of the scene at the Woddbourne shul, saw 80-90 mispallelim gather from various summer homes and bungalow colonies in the area. Shabbos mornings saw a public Kiddush and there were gatherings for Shalosh Seudos and Melava Malka as well, open to the public as always and of course free of charge. Because of the size of the crowds, accommodations for women to join the Shabbos tefilos presented a problem. Plans are on the table to address this issue in time for next summer.

While Sunday, August 31, the day before Labor Day, marked the official end of the summer vacation season, in practice minyanim were still ongoing well into Monday. Rabbi Jungreis insists that as long as people want to daven he will remain, even though that means showing up for the opening of the cheder at Chaim Berlin where he teaches at the last second to set up the classroom for the new school year. What about taking a well-deserved break, a vacation? “This is my vacation,” he says flatly.

The Rebbe informs Matzav.com that the Woodbourne shul will be open for the first night of Selichos, Motzaei Shabbos Kodesh Parshas Nitzavim-Vayelech (night of September 20-21). The shul will reopen for Chol Hamoed Sukkos with a large Sukkah outside, for Mishne Torah and tefilos on the night and day of Hoshanah Rabbah, October 15th.