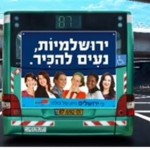 Women of the Wall has stirred the pot again with their latest bus ads showing women wearing talleisim.

Women of the Wall, the radical group that encourages “gender equality” at the Kosel, sponsored the advertisements. The pictures featured women wearing talleisim and holding Sifrei Torah. The words “End the obscene pictures” were spraypainted on the buses.

“This is only about gender roles and discrimination against women and the image of women,” said Women of the Wall spokeswoman Shire Pruce. “If those were boys in the ads, this would not be a news story.”