Over a hundred women arrived at the Kosel yesterday morning wrapped in talleisim and wearing yarmukahs, to mark 20 years since the inception of the “Women of the Wall” organization. Women of the Wall organizes female prayer groups at the Kosel each month on Rosh CHodesh. The participants usually wear tallis, tefillin and yarmulkahs and read from the Torah. The group, which included dozens of Reform movement members from North America, said Hallel with singing, consequently provoking heated responses from other visitors and the Kosel‘s ushers, who demanded that the group leave the place as its members failed to follow the place’s customs.

Anat Hoffman, executive director of the Israeli Religious Action Center (IRAC), the public and legal advocacy arm of Reform Judaism in Israel, took part in the prayer. She said that the group met with hostility, although the women did not intend to create a provocation.

The vast majority of the Women of the Wall are feminist Orthodox who come to the site once a month to say a prayer and sing quietly, she said. “Because this time there were about a hundred women there, it sounded louder.” According to Hoffman, while the High Court of Justice has already allowed the women’s organized prayers to be held at the Kosel, the Kosel‘s rules stipulate that mispallelim‘s feelings must not be hurt, and also set a prison sentence to offenders. The Kosel‘s rov, Rav Shmuel Rabinovitch, “interprets the term ‘hurting feelings’ in a way that silences half of the Jewish people,” she said. “The ushers want us to take off our prayer shawls and move our lips without making a sound.” 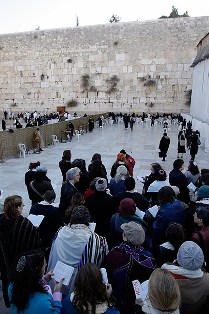 “We feel that there is a great deal of hypocrisy here: On the one hand, the Western Wall symbolizes the unity of the Jewish people, and on the other hand women, who comprise half of this nation, are being silenced, along with the traditions of the biggest Jewish community in the world (American Jewry),” Hoffman claimed.

Meanwhile, Rav Rabinovitch said that the women usually hold their prayer nearby the Kosel, and not at the Kosel Plaza itself. “Unfortunately, they severely offended the holy place… and stirred violence and division,” he said.

“The High Court barred them from acting in a way that is not in line with local custom, and the local custom is that women don’t wear a tallis, put on tefillin or read from the Torah.

“The Kosel is open to every woman to daven in her own way, as long as she does not breach the local custom, which is halacha. An attempt was made today to create a provocation, desecrate the site and hurt the feelings of men and women mispallelim.

“This is a severe and inappropriate act, and we will make sure not to let it happen again,” he concluded.