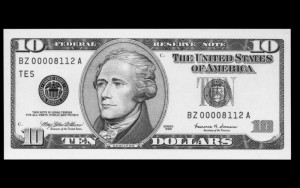 The U.S. Treasury announced on Wednesday that beginning in 2020, a woman’s face will replace Alexander Hamilton on the $10 bill.

Treasury Secretary Jack Lew said he’s looking for public input on which female historical figure should become the first to appear on U.S. paper currency for the first time in 119 years.

Hamilton will remain either on the bill’s reverse side or in a separate series while the 1.9 billion $10 bills in circulation are likely to last another 10 years.

No woman has appeared on a new currency since Martha Washington on a $1 silver note until 1896. Pocahontas was the first female, appearing on the $20 note beginning in 1865. Read more at USA Today.