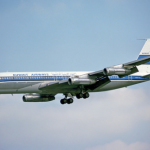 An Israeli citizen who has lived in the United States for 15 years was barred from boarding a Kuwait Airways flight to London, according to a new report by the New York Daily News.

Iris Eliazarov, 26, moved to the U.S. when she was 11. She holds an American green card, but her passport is Israeli. On Nov. 1, 2014, Eliazarov arrived at John F. Kennedy Airport to catch a Kuwait Airways flight to London, but she was not allowed to board. Her husband, David Nektalov, an American citizen traveling on a U.S. passport, was allowed on the flight.

A Kuwaiti law prohibits Israeli citizens from traveling on the country’s national air carrier. Eliazarov has filed a discrimination lawsuit against the airline, claiming that its policy violated her civil rights.

“This experience has awakened the nightmare of the experience of the Jewish people in Europe in the last century,” Eliazarov wrote in her affidavit.

John Maggio, an attorney for Kuwait Airways, told the New York Daily News that the lawsuit has no merit because the airline’s policy is based on passengers’ citizenship, not their religion.