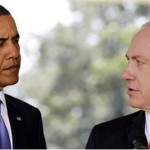 Behind the scenes, senior U.S. diplomats hinted to European allies they were prepared to restart talks at the UN on the creation of a Palestinian state. But now, as the violence surges, the U.S. is sticking to its traditional stance that the UN should butt out of the Israeli-Palestinian peace process.

Former John Kerry advisor Ilan Goldenberg cited “a genuine process of reassessment, but I think they came to the conclusion that the options are not good.” ”

In the aftermath of the Iran deal, there is no interest among Democrats to have another fight with Israel,” said Goldenberg, now director of the Middle East Security Program at the Center for a New American Security. “Nobody is talking about a resolution in the UN Security Council now,” an Arab diplomat said.