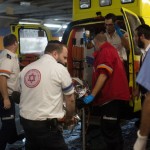 You’re a journalist on the ground in Israel during the current wave of terror. Murders are committed on your street corner. Protests are organized by your neighbors.

How do you tell the story dispassionately?

“Journalism is rooted in culture and society, so obviously a journalist covering a conflict that is within a nation or a culture he is involved with is not an objective journalist,” says Motti Neiger, a member of the Department of Communications at Netanya Academic College.

While there is a need to maintain transparency and “keep reporting on every attack that happens,” the constant news reporting can cause public alarm, acknowledges Tamara Zieve, Jewish world editor at the Jerusalem Post.

“Media serves as an amplifier, creating an atmosphere of terror.…If there were not media, it would feel like there is less terror,” says Neiger.

Simon Plosker, managing editor of the Israel-based media watchdog organization HonestReporting, says that only “half the story is being told” regarding the violence.

“One wouldn’t expect the Arab media to be balanced, and when the international media tells the story in a skewed manner, it makes it even easier,” says Plosker.

In the scenario where Arab Israeli media portrays a terrorist’s death at the hands of Israeli security forces as “murder,” and omits the fact that the “victim” had committed a terrorist attack before being killed, it can lead to fear by the general Arab population. Zieve says that while Israeli Jews are afraid to leave their homes over fear of getting attacked and killed, Israeli Arabs are also afraid—of being mistaken for terrorists and being killed.

The most recent Peace Index poll published by the Israel Democracy Institute and the Guttman Center for Surveys showed that there is considerable fear of attacks on both sides. The majority of the Israeli Jewish public (57 percent) fears that they or someone important to them will be harmed in the current wave of attacks. The angst is even greater among the Arab public, where 78 percent answered that they fear being harmed.

A recent article published by Zieve cites the story of an Arab cashier who was nearly attacked with tear gas by a Jewish patron who shouted to her colleagues, “Do you think she should be allowed to work in a place like this?” The cashier’s uncle, who had come to pick his niece up from work, was outside and watched the incident happen. He didn’t come to his niece’s rescue “for fear the police would arrest him should he get involved,” according to the report.

“If Arab media…keeps spreading lies about our [Israeli government] policies, this will continue on and on,” Plosker says.

Plosker worries that the impact of media misrepresentation—on both sides—will have lasting effect in Israel, where “it is impossible to avoid mixing with Arabs—nor should we avoid mixing with Arabs. They are fellow citizens.…This is terrible for Israeli society; about 20 percent of the population is actually Arabs.”

But Neiger says Israel has seen this before, and that it represents an inherent by-product of conflict and war. He says that several studies conducted in times of crisis (from the Gulf War to 9/11) point to abandonment of journalistic norms and values— such as the search for neutrality, factuality, and objectivity—in favor of patriotic loyalty. In other words, the journalist is faced with contradictory allegiances, and chooses his or her nationality.

“The coverage of violent conflict when the journalist is a member of one of the conflicting parties involves a professional dilemma: the journalist’s traditional paradigm—of objectivity and neutrality—is challenged and confronted by the journalists’ patriotic sentiment and their ethnic and cultural belonging,” writes Neiger in an academic paper published in 2005. “In fact, journalists are members of two communities simultaneously: the professional community and the national one. The national-cultural community calls upon the journalist to take part in the conflict, to be its representative and its weapon in the battle of images and soundbites—to tell an unbalanced, objective story.”

Neiger investigated this phenomena after the Arab Israeli riots that took place at the outset of the second Palestinian intifada in 2000 and demonstrated that more often than not, “sheer patriotism emerges in situations in which the national community is considered to be at risk.”

During the beginning phase of the second intifada, Neiger says Jewish Israeli newspapers excluded Arab citizens from the overall Israeli citizenry and integrated them with that of the Palestinians living in the West Bank and the Gaza Strip—by defining the events in the frame of the military discourse; by reporting from an ethnic point of view, placing itself (the media) alongside the Israeli police and the Jewish majority and against the “Arab citizen” (the term “Israeli citizen” was largely reserved for Jewish victims); and by using visual-pictorial illustrations that contrasted the visual with the text.

“A Channel 2 television interview with a leading Israeli Arab figure….Was conducted against a background of pictures from Ramallah…and Hebron—that is, the studio interview with a representative of Israel’s Arab citizens was juxtaposed with a visual from the West Bank and Gaza Strip,” Neiger writes.

Yet instead of dismissing the media, Neiger offers advice.

“Media should provide the larger context and let us understand how the other side understands the situation. Complexity is a better answer for fear than the black and white,” Neiger tells JNS.org.

Zieve says Jewish and Arab media outlets have a responsibility to “highlight the sane, moderate, and human voices on the other side—those that condemn violence and want peace.”

She calls on the Israeli and American publics to help, too.

“Many people use their social media accounts as a platform to vilify and dehumanize the other side,” Zieve says. “It is one thing to try to show the truth about what is going on, but often very old videos are pulled out and circulated under banners such as, ‘This is what we are dealing with.’”

This only increases desensitization and increases fear of “the other,” says Zieve, highlighting a recent viral video of a 3-year-old Jordanian girl saying she wants to a kill a Jew.

“If you see these inciteful pages or posts, have them removed,” she says, “That is something anyone can do and it definitely plays a part in getting rid of fear.”