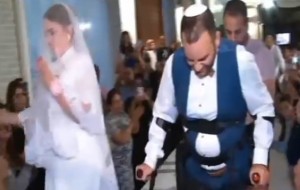 With the help of Israeli technology, a disabled IDF veteran paralyzed in a car accident 12 years ago was able to walk down the aisle.

After seeing the technology on TV, Shevy turned to the Israeli developer to ask to loan the equipment (the system costs some NIS 250,000 to buy). The ReWalk developer, Amit Goffer, who is paralyzed himself, agreed.

After three months of secretive training, sponsored by the Defense Ministry, Shevy shocked his family by walking down the aisle to his bride after over a decade of being wheelchair-bound.

“Just walking. It was different, just seeing everyone at eye-level and not chair-level. It was totally different,” Shevy told the TV station. “It was really wonderful.”

With some assistance from his personal trainer, Shevy made it down the white satin carpet and up several stairs and was wed with both feet planted squarely on the ground, to much cheering from his friends and family.

“People were very moved to see me walking,” he said.

Shevy was paralyzed from the waist down in a car accident during his army service. After the wedding, he returned the ReWalk system.

ReWalk allows independent, controlled walking similar to that of an able-bodied person, as computers and motion sensors do the “heavy lifting.” The system controls movement using subtle changes in center of gravity, mimics natural gait and provides functional walking speed, enabling even paraplegics to move independently — and even to run marathons, as one paralyzed woman did several years ago.