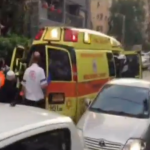 A friend of the woman who fought off a knife-wielding terrorist who entered her Ra’anana home today recounted how Dikla Dvir confronted the Palestinian man and shoved him out of her living-room into the clutches of police officers.

Mahmoud Faisal Bisharat, a 20-year-old Palestinian man, stabbed three Israelis outside a shul this afternoon after being prevented from entering the shul. A 40-year-old man was seriously injured and two women lightly injured by the stabber. The man was later said to be in stable condition, and his condition was defined as moderate, after surgery.

Bisharat fled the scene, and a gun-wielding citizen fired a warning shot in the air as he raced through a nearby park. He then tried to enter the Dvir home, two blocks away.

“He got in through the glass-paned doors and suddenly [Dikla Dvir] noticed someone inside her house, wielding a large knife. She was shocked, he raised the knife and came to stab her,” Dorit Avisar, the friend, said.

“He managed to touch her with the blade but she screamed. She said she couldn’t believe the screams coming out of her mouth, and with both hands she grabbed him, pushed him out and immediately locked the glass doors,” Avisar told Ynet.

Avisar had visited Dvir just 20 minutes before the incident, she said. “We left home on foot and then she phoned me: ‘Watch out, don’t leave your house, a terrorist was here and stabbed me, but don’t worry, I’m fine. But let the kids know that they should come home and the police caught one but now they’re chasing another one,” Avisar recounted.

Police searched in vain for a suspected accomplice who was believed to have driven Bisharat, a resident of a village near the West Bank city of Jenin, to Ra’anana.

After Dvir shoved Bisharat out the door, she rushed to check that all entrances to the house were locked. She called the police and informed them of the incident and prevented her husband, who wanted to go outside and restrain Bisharat, from leaving the house.

“She pulled him back inside, ’You aren’t going anywhere,’ she said, and locked the door again,” her friend recalled.

“With that resourcefulness and inexplicable strength, she overpowered him and saved herself and her family,” Avisar said.