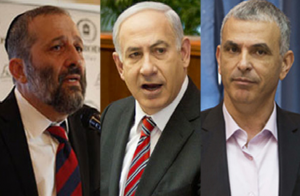 Upon returning from Washington, Prime Minister Bibi Netanyahu on Thursday convened his coalition leaders in order to find a solution to the ongoing crisis over the approval of the state budget.

As of now, the Finance Ministry is still objecting to a demand by Shas to cancel VAT on public transportation. Furthermore, the disagreements over the size of the defense budget have yet to be resolved completely.

Shas Chairman MK Aryeh Deri has threatened that his party might oppose the budget if the VAT law is not changed to exclude public transportation, as he had demanded. In response, Finance Ministry officials asked to meet with Netanyahu in order to try and persuade him to talk Deri out of his VAT demand. The Ministry warned that accepting such a demand would be a dangerous precedence that might lead to the cancellation of VAT on other services.

Meanwhile, progress has been made on the issue of the defense budget, after a meeting between Finance Minister Moshe Kachlon and Defense Minister Moshe Ya’alon. The two have come closer to signing an agreement, whose terms are expected to include the shortening of the mandatory service to two years and four months and raising soldiers’ salaries.