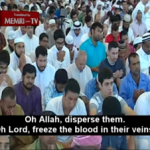 Jewish human rights group The Simon Wiesenthal Center on Sunday challenged Doha-based Al Jazeera to report on a Qatari Sheikh who preached, “Allah, kill all the Jews, freeze the blood in their veins,” as broadcast on Qatar TV.

“Against the backdrop of supercharged anti-Jewish rhetoric sweeping the Arab and Muslim world, we believe that the leading Arab TV network should tackle the issue head-on,” said Rabbis Marvin Hier and Abraham Cooper, Dean and Founder and Associate Dean of the SWC.

“Here are but a few questions that deserve answers,” the two rabbis said. “Is this Sheikh paid by the Qatari government? Why would Qatar Television broadcast such an incendiary sermon which surely fans the already rampant Jew-hatred flames in the Arab World? Do these words reflect the views of the Emir of Qatar, an ardent supporter of Hamas?”

“Qatar presents itself as on the cutting edge of a forward-looking Arab world and is the proud host of the whole world of the 2022 World Cup,” they said. “Yet, its leader has supported genocidal Hamas in word and deed and appears to be facilitating the spread of Jew-hatred at home and across the Arab world. Is this Qatar’s policy, if so, it deserves worldwide condemnation.”

“We hope Al Jazeera will fulfill its journalistic responsibilities and provide the world with some answers,” they said

Al Jazeera did not immediately respond to The Algemeiner‘s request for comment.

MEMRI, the Middle East Media Research Institute, published a translation of the Friday sermon by Sheikh Al-Hawwas in Qatar and aired on Qatar TV on July 18.

“We must support our brothers (in Gaza) and pray for them, so Allah helps them. How can we not, when we witness the blessed fruits of their confrontation with the enemy?” the Sheikh asked. “True, they are not equal in strength and their equipment is not on par with them, but Allah bestows blessings upon the weapons that our brothers have managed to produce by themselves, in order to vanquish the enemy.”

“For the first time in the history of the abhorred country, the state of Israel, sirens are heard around the clock and over three million people flee to their hideouts,” he said. “Schools, governmental departments, and airports came to a halt. When have we ever heard of such things?”

“This is the beginning of good things to come. After today, there is no turning back. It is the duty of our nation to continue to support our brothers,” he said.

“Oh, Allah increase the pressure You exert upon the plundering Jews,” he said. “Demonstrate upon them the miracles of Your might, for they are no match to You. Count them one by one, and kill them to the very last one. Do not spare a single one of them.”

“Oh Allah, disperse them. Oh Lord, freeze the blood in their veins,” he said. “Oh Allah, tear them asunder. Oh Allah, sow discord in their hearts. Oh Allah, do not let them prevail. Make an example of them for their allies. Oh Allah, bring down the planes of their air force, burn their infantry and sink the ships of their navy.”