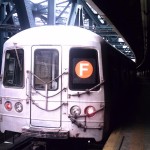 Dropped calls, lost connections and sputtering phone batteries will soon be a thing of the past on the New York subway system, thanks to efforts to bring the nation’s busiest transit system into the 21st century, the AP reports.

Thirty subway stations will get complete overhauls to make them cleaner, safer and better lit. Cellphone charging stations will be installed on subway cars and some 1,500 new Metropolitan Transportation Authority buses. Read more.