The multitude of mysteries revealed following the death of Apple co-founder Steve Jobs’ death now includes one that puzzled car enthusiasts for years: How did Jobs get away with driving without a license plate? It was common knowledge that Jobs would park his Mercedes SL55 AMG in a handicapped spot at Apple’s Cupertino, Calif., headquarters, with nothing to identify his vehicle other than the tiny barcode that usually rests behind the rear license plate. According to Walter Isaacson’s new biography, Jobs wanted to avoid having a plate for privacy reasons; and yet when having a license-less silver Mercedes became a kind of trademark, Jobs kept motoring without one “because I don’t.” 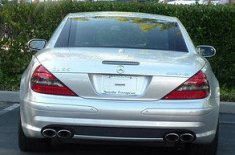 For years, rumors swirled that Jobs had either won a special dispensation from California authorities or was just daring police to stop him. While the why remains somewhat cloudy, an interview by ITWire with a former Apple security executive reveals the real reason: a little-known loophole in California vehicle laws that gives owners up to six months to get plates for their vehicles.

According to Jon Callas, now chief technical officer of Entrust, Jobs would arrange with his vehicle leasing company to switch out his silver Mercedes every six months with a new, identical model – just another of the complicated and expensive ways Jobs thought differently.