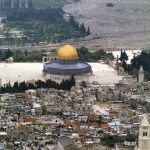 Why is the Palestinian Authority (PA) opposed to Jordan’s proposal to install surveillance cameras on the Har Habayis, sacred to Christians, Muslims and Jews?

This is the question that many in Jordan have been asking in light of the recent agreement between Israel and Jordan that was reached under the auspices of US Secretary of State John Kerry. The idea was first raised by Jordan’s King Abdullah in a bid to ease tensions at the holy site in the Old City of Jerusalem.

Shortly after Israel accepted the idea, the Palestinian Authority rushed to denounce it as a “new trap.” PA Foreign Minister Riad al-Malki and other officials in Ramallah expressed concern that Israel would use the cameras to “arrest Palestinians under the pretext of incitement.”

During the past two years, the Palestinian Authority and other parties, including Hamas and the Islamic Movement (Northern Branch) in Israel, have been waging a campaign of incitement against Jewish visits to the Haram al-Sharif. The campaign claimed that Jews were planning to destroy Al-Aqsa Mosque.

In an attempt to prevent Jews from entering the approximately 37-acre (150,000 m2) site, the Palestinian Authority and the Islamic Movement in Israel hired scores of Muslim men and women to harass the Jewish visitors and the police officers escorting them. The men are referred to as Murabitoun, while the women are called Murabitat (defenders or guardians of the faith).

These men and women have since been filmed shouting and trying to assault Jews and policemen at the Haram al-Sharif. This type of video evidence is something that the Palestinian Authority is trying to avoid. The PA, together with the Islamic Movement, wants the men and women to continue harassing the Jews under the pretext of “defending” the Al-Aqsa Mosque from “destruction” and “contamination.”

The installation of surveillance cameras at the site will expose the aggressive behavior of theMurabitoun and Murabitat, and show the world who is really “desecrating” the Islamic holy sites and turning them into a base for assaulting and abusing Jewish visitors and policemen.

The cameras are also likely to refute the claim that Jews are “violently invading” Al-Aqsa Mosque and holding prayers at the Temple Mount. The Palestinian Authority, Hamas and the Islamic Movement have long been describing the Jewish visits as a “provocative and violent incursion” into Al-Aqsa Mosque. But now the cameras will show that Jews do not enter Al-Aqsa Mosque, as the Palestinians have been claiming.

Another reason the Palestinians are opposed to King Abdullah’s idea is their fear that the cameras would expose that Palestinians have been smuggling stones, firebombs and pipe bombs into Al-Aqsa Mosque for the past two years. These are scenes at the PA, Hamas and the Islamic Movement do not want the world to see: they show who is really “contaminating” the Haram al-Sharif. Needless to say, no Jewish visitors have thus far been caught trying to smuggle such weapons into the holy site.

By rejecting the idea of setting up 24-hour surveillance cameras at the Haram al-Sharif, the Palestinian Authority has found itself on a course of collision with Jordan. Jordanian politicians and columnists have voiced outrage over the stance of the PA, and have dubbed it harmful to Palestinian and Islamic interests.

The Jordanian newspaper Al-Ghad, which is close to the government, quoted Jordanian politicians as denouncing the opposition of the Palestinian Authority to the cameras as “inappropriate, clumsy, tasteless and unfair.”

Sources in Ramallah explained this week that the PA’s opposition to cameras should also be seen in the context of the power struggle between the Palestinians and Jordan over control of the Islamic holy sites in Jerusalem. The Jordanians have long been seeking to preserve their status as “custodians” of Al-Aqsa Mosque and other Islamic holy sites in Jerusalem. This is a status that some Palestinians and the Islamic Movement in Israel have been trying to change during the past two decades, especially after the signing of the Oslo Accords between the PLO and Israel in 1993.

The Palestinian Authority’s opposition to the installation of cameras is seen as an attempt to undermine Jordan’s status at the Islamic holy sites. Many Palestinians argue that they, and not the Jordanians, should be in charge of the Haram al-Sharif. Members of the PA are opposed to the cameras because it is a Jordanian proposal and reinforces Jordan’s role at the holy site.

As such, the Palestinian Authority’s position could be seen as an attempt to change the status quo at the holy site by driving the Jordanians out of the area. King Abdullah is obviously aware of the Palestinian attempt to prevent him from playing any role at the holy site; that is why he was quick to reach a deal with Israel about the installation of cameras. The PA, meanwhile, will continue to work against having cameras in the hope of preventing the world from seeing what is really happening at the site and undermining Jordan’s “custodianship” over Islamic holy sites in Jerusalem.

It now remains to be seen how Secretary Kerry, who brokered the camera deal between Israel and Jordan, will react, if at all, to the latest Palestinian Authority attempt to continue escalating tensions at the holy site. If Kerry fails to pressure the PA to stop its incitement and repeated attempts to exclude the Jordanians from playing any positive role at the Haram al-Sharif, the current wave of knife attacks against Jews will continue.