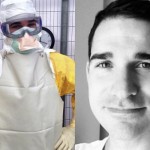 Just before arriving in the Ebola-torn nation of Guinea, 33-year-old Craig Spencer posted a picture of himself on Facebook smiling in a yellow hazmat suit, face mask, and gloves-his new uniform.

In the caption next to his image, after announcing his mission with Doctors Without Borders/Médecins Sans Frontières (MSF), he typed a plea: “Please support organizations that are sending support or personnel to West Africa, and help combat one of the worst public health and humanitarian disasters in recent history.”

His brave mission, followed by a devastating diagnosis, complicates an already nightmarish scenario for health-care workers fighting against Ebola: It may be deterring doctors from helping-right when they’re needed most. The news of Spencer’s positive test for the virus, announced Thursday night in New York City, might achieve the exact opposite of his stated goal.

Spencer, whose LinkedIn account lists him as an international emergency-medicine fellow at New York-Presbyterian Hospital/Columbia University Medical Center, completed his assignment in Guinea on Oct. 12 and landed at JFK International Airport on Oct. 14. Once back in his Harlem apartment, he closely monitored his condition, taking his temperature twice a day. Feeling healthy, he reportedly went on a 3-mile jog, as well as took the L train to Williamsburg to go bowling at a venue known as Gutter. According to health officials in New York, he did not present a fever until Thursday morning, meaning he was not symptomatic on public transit. Four people have been identified as potential contacts, including Spencer’s fiancée, but all are in stable condition.

At a press conference Thursday evening, New York Mayor Bill de Blasio addressed the situation calmly. “We want to state at the outset there is no reason for New Yorkers to be alarmed. Ebola is an extremely hard disease to contract,” he said. “Being on the same subway car or living near a person with Ebola does not in itself put someone at risk.” New York City Health Commissioner Mary Travis Bassett reinforced de Blasio’s statements saying that Spencer followed the self-monitoring guidelines set out by MSF for those returning from West Africa, which includes checking one’s temperature twice a day.

In West Africa itself, in the four weeks since Spencer arrived in Guinea, things have gotten worse. Much worse. With close to 10,000 confirmed cases and more than 4,800 deaths in West Africa, humanitarian organizations’ calls for more medical workers have turned to shouts.

Around the time that Spencer decided to go to West Africa, it seemed that the world was finally getting involved. In mid-September, the United States, joined by several other countries, pledged more than $175 million to the fight and 3,000 troops. Days after that announcement, the United Nations Security Council unanimously passed an “unprecedented resolution” calling for $1 billion (and an additional $570 million on behalf of WHO) from world leaders in order to send the people and supplies necessary to contain the epidemic.

Ten days later, when the dust had settled, MSF President Joanne Liu called their bluff. “Generous pledges of aid and unprecedented UN resolutions are very welcome. But they will mean little, unless they are translated into immediate action,” Liu said. “The reality on the ground today is this: The promised surge has not yet delivered.” As of Oct. 17, over a month after the plans were set, the UN has only collected 38 percent of its goal.

MSF, the first humanitarian organization to recognize the epidemic, has been waiting for help to come since March. According to a spokesperson for the organization, the organization employs 270 international and around 3,018 locally hired staff in the three affected countries: Liberia, Guinea, and Sierra Leone. Among those nations is a population of 22 million. Some heroic volunteers, like Spencer, have joined the fight-but not enough. “The sick are desperate, their families and caregivers are angry, and aid workers are exhausted,” Liu continued at the meeting. “Maintaining quality of care is an extreme challenge.”

“People are giving advice, talking and talking, but we don’t need advice. We need people on the ground doing the job like us. Please come.”

Identifying patients with an infection, isolating them, and providing quality care, are the key methods needed to stop Ebola. The “tried and true measures” that CDC Director Thomas Frieden has referred to dozens of times. Those methods require facilities, equipment, and, most importantly, people. Even before Ebola struck in West Africa, all three were in short supply.

Humanitarian Paul Farmer and World Bank Leader Jim Yong Kim captured the problem in aWashington Post article last week. “The reality is this: The Ebola crisis today is a reflection of longstanding and growing inequalities of access to basic health care,” it reads. “Guinea, Liberia, and Sierra Leone do not have the staff, stuff and systems required to halt the outbreak on their own.” In other words, if the health care systems in West Africa are failing, it’s because they never had a chance in the first place.

In a May 2013 report, Global Health Africa detailed the problems facing West African health-care systems. Staffing issues were one of the main problems discussed. The World Health Organization’s minimum physician-to-patient ratio lists one doctor per 5,000 citizens. In Sierra Leone, the group reported less than 10 physicians per 100,000 inhabitants. Liberia, the epicenter of the epidemic, wasrelying on just 50 doctors to care for the entire nation before the outbreak occurred.

Sebastian Vidal, a field coordinator for MSF, told NPR he was “flabbergasted” at the lack of international response. “We see that Western countries are preparing themselves in case they have one or two cases,” said Vidal. “This is not acceptable. You just cannot let a whole continent become infected and people die by hundreds. People are giving advice, talking and talking, but we don’t need advice. We need people on the ground doing the job like us. Please come.”

“There’s just some hysteria surrounding the virus that prevents people from coming,” Craig Kenzie, a logistics manager with MSF told Canadian Breaking News Wednesday after returning from a trip to Kailahun in Sierra Leone. “Of all the missions I have done with MSF, on the ground, this is one of the clearest needs that I’ve ever worked in. You have a huge need that’s just not being met. And it makes no sense.” In other disasters, such as earthquakes or tsunamis, volunteers come running. But in the face of Ebola, they run the other way.

While hysteria is unnecessary, fear is understandable. According to the WHO, more than 400 health-care workers in West Africa have been infected with Ebola. More than half have died. With a shortage of supplies, many nurses and doctors are left to treat their patients without even the most basic of protection, such as gloves. In Richard Preston’s gutting piece for The New Yorker, he describes the inside of an isolation ward as if it’s a torture chamber-drenched in human bodily fluids and reeking of feces. These conditions aren’t acceptable, but they also aren’t the whole story.

Some isolation wards, such as the one the U.S. Army is constructing in Liberia, will be fully functioning facilities with the best technology that will allow health-care workers to remain virtually risk-free if they follow proper protocol. But until the international community comes together to flood the region with the facilities, doctors, and supplies it needs, it will be Preston’s image that we remember, and Spencer’s story that we tell.