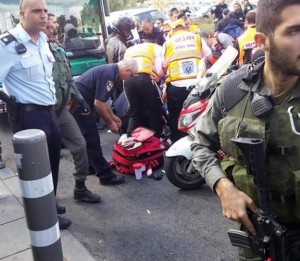 The most recent spate of violence in Israel has deeply affected Jews all throughout the world. We agonize over our brothers’ and sisters’ pain and their collective fear of being able to walk the streets safely. Each day we scour the news for updates while praying for the recovery of terror victims and for peace and calm to be restored to the region.

We also wait impatiently for the international community to call out the blood-thirsty murders and their inciters for who they are. To us, nothing can be more obvious than the moral correctness of the Israeli people and the cruel depravity of their Arab attackers. Countless videos depict incitement and cold-blooded savagery, making it clear as to who the bad guys are in this struggle.

We are upset when the international community remains silent despite this deluge of evidence. More troubling is the moral equivalency that the Obama administration and others have imposed, as they continually insist that “both sides” bring an end to the violence. Even more disturbing is the false depictions of Israelis as instigators who wish to assume increased control over the Al-Aqsa Mosque or aggressors who wantonly use “excessive force” on the Arab population.

The question, though, is why? Why does it bother us so much that the international community sees us in this way? Do we not possess our own moral compass? Can we not be assuaged by the fact that the IDF has taken every possible measure to avoid civilian casualties? Is it not reasonable for us to take solace in the fact that Israel’s government has made every effort to secure peace? So what if some reporter from MSNBC or CNN or the BBC fails to report key details or places the blame on “settlers”? Who cares if ignorant college kids rally on campus or if late-night talking heads point the finger at us? We know that we are doing the right thing and shouldn’t let someone else’s view, particularly someone with a clear pro-Palestinian agenda, change our behaviors.

I believe that there are two answers to this question. The first is practical and pragmatic. We understand the importance of strong international backing and support. Without question, it makes many things easier when the world community acknowledges Israel for its upstanding conduct while also acknowledging unilateral Palestinian incitement and aggression. These include such as ceasefires, peace negotiations, applications for foreign financial and military aid, and the ability to promote and sell Israeli products on the international marketplace.

The other answer is deeper and harder to measure. As God’s Chosen Nation, we recognize our moral imperative. We understand that our job is to serve as a light unto the nations and are disturbed to no end when the world accuses us of moral corruption. How can it be, we ask, that we try so hard to do things right in every arena and still can’t catch a break? It seems like a collective application of “tzaddik v’ra lo” and “rasha v’tov lo,” issues that have troubled every Jewish leader and thinker including Moshe Rabbeinu.

Perhaps the greatest irony in all of this is that our nation has always gone above and beyond specifically when it comes to occupying the land of Israel. Despite a divine promise that his children would inherit the land, Avraham refused to take possession of Maaras Hamachpeila without paying its owner. In fact, he greatly overpaid for the right to bury Sarah. (Bereishis 23) Later, when Yehoshua was commanded to capture the land, he first gave its inhabitants the option of remaining assuming certain conditions. Only those who refused were engaged in battle. Most recently, the State of Israel followed a rigorous legal process into existence, and refused to cut corners in a quest to force its statehood into existence.

Thankfully God, in His infinite wisdom, foresaw this eventuality. That is why, according to Rashi (commentary to Bereishis 1:1,) He began the Torah with the story of creation.

It was not necessary to begin the Torah except from “This month is to you,” (Exodus 12:2) which is the first commandment that the Israelites were commanded… Now for what reason did He commence with “In the beginning?” … For if the nations of the world should say to Israel, “You are robbers, for you conquered by force the lands of the seven nations [of Canaan],” they will reply, “The entire earth belongs to the Holy One, blessed be He; He created it (this we learn from the story of the Creation) and gave it to whomever He deemed proper When He wished, He gave it to them, and when He wished, He took it away from them and gave it to us.

This comment begs an obvious question. How does it help us that the Torah would proclaim the Jews’ rights to Israel when the only ones who would abide by it are the Jews themselves? Does it really help that we can point to a verse in the Torah as the basis for our claim if most of the world will simply laugh in our faces and still call us thieves and settlers?

The answer is that the Torah is teaching us crucial lessons about morality. First, right and wrong is not determined by the human mind. Time and again the world has witnessed abject cruelty and twisted morality justified in the name of religion, social engineering, racial preservation and the like. If we leave morality and ethics in the hands of man alone, we are all but guaranteed some incorrect conclusions, if not much worse. Only God has the ability to provide the type of moral stewardship and guidance that can withstand the test.

Second, we may never be able to change the minds of those who gang up against us, literally, verbally, politically or otherwise. Still, if we act the way that God expects us to, then we can rest assured knowing that we have fulfilled our moral imperative by living our lives as His true servants and ambassadors.

So while we must remain vigilant that the world hears the right message and that key voices be held accountable to maintain factual and moral accuracy, we must also realize that the final statements about right and wrong, good and evil, fair and unjust cannot and will not be uttered by any foreign statesmen or news anchor. All such determinations lie in the hands of our moral Rock and history will one day, hopefully sooner than later, prove the correctness of our stance and the veracity of our values.

Rabbi Naphtali Hoff is an executive coach and president of Impactful Coaching and Consulting (ImpactfulCoaching.com). He can be reached at 212.470.6139 or at president@impactfulcoaching.com.