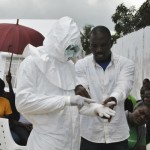 The World Health Organization has said previously that the number of Ebola cases could “eventually” surpass 20,000, but now the agency is warning that number will be reached by November 2, soaring by the thousands every week unless countries ratchet up efforts to halt the outbreak.

WHO officials said in a statement that “without drastic improvements in control measures’ the number of new cases and deaths will rise from hundreds to thousands per week.

The current outbreak in West Africa already has killed 2,800 people from among 5,800 infection cases.

“We are seeing exponential growth and we need to act now,” said Christopher Dye, a co-author of the WHO study. Dye said the fear is that Ebola “will become more or less a permanent feature of the human population.” Read more at NDTV.