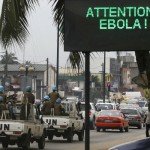 The World Health Organization now predicts there could be as many as 10,000 new cases of Ebola per week in just two months. That grim prediction was made by WHO Assistant Director-General Dr. Bruce Aylward at a press conference Tuesday.

For the past month, there have been around 1,000 new cases each week. The WHO also estimates Ebola’s death rate to be at 70 percent, up from the 50 percent it initially said.

“A lot more people will die,” said Aylward, if the world does not do more to fight the spread of the virus. He said WHO is focusing on providing treatment and combating the challenges of West Africa’s broken health system. “It would be horrifically unethical to say that we’re just going to isolate people,” he said. More than 4,000 have already died. Read more.