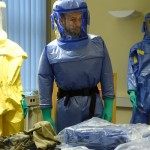 Europe should expect to see more cases of Ebola after a Spanish nurse contracted the virus from a sick patient last week, a senior official in the World Health Organization said today.

“Such imported cases and similar events as have happened in Spain will happen also in the future, most likely,” WHO European director Zsuzsanna Jakab said. “It is quite unavoidable… that such incidents will happen in the future because of the extensive travel both from Europe to the affected countries and the other way around.”

The nurse treated a Spanish priest who had contracted the virus in Sierra Leone and later died. She was sick for about a week before testing positive on Monday. Health officials fear she might have spread the disease during that time.

Still, Jakab said Europe is at low risk for an outbreak and Western Europe in particular is “the best prepared” region in the world to respond to Ebola. Read more.