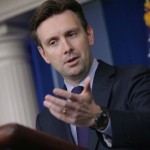 A day after Secretary of State John Kerry confused everyone by saying that the United States is not necessarily at war with ISIS (he said “we’re engaged in a major counterterrorism operation”), the White House clarified that, actually, we are at war.

“The United States is at war with ISIL in the same way that we are at war with Al Qaida and its Al Qaida affiliates all around the globe,” Press Secretary Josh Earnest said Friday.

Pentagon spokesman John Kirby backed up the sentiment, saying that while this is “not the Iraq war,” everyone should “make no mistake, we know we are at war with ISIL.”

Earnest did say, however, that the U.S.’s strategy against ISIS is “different than the strategies previously pursued in Iraq but is “consistent with the counterterrorism strategy we’ve pursued in cases all around the world.” Read more at The Hill.