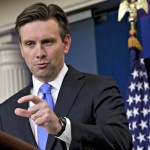 This comes after North Korea itself boasted that it had successfully deployed a hydrogen bomb after seismic activity registered near one of the Hermit Kingdom’s nuclear test sites early today. Read more at The Washington Post.