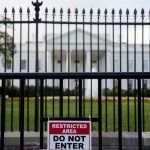 The man who was nabbed by dogs on the White House lawn Wednesday is apparently a veteran of break-in attempts: 23-year-old Dominic Adesanya of Bel Air, Maryland was arrested in July for hopping over a White House barrier and detained again three days later for trying to break into the Department of Treasury.

Adesanya told officers in July that he was at the White House because he was “targeted due to his race by the Rothchild family who owned the Federal Reserve Bank” and asked for the cameras that were placed in his house to be removed. A judge ordered a psychological screening for Adesanya and it was determined that he was “incompetent” to participate in his own case. He was released and ordered to return to court for a mental evaluation and subsequent hearing, but the next day, Adesanya was back down the street from the White House, yelling profanities at employees and striking officers, demanding, “I want my check and stop watching me.”

Following a July 31st hearing, Adesanya was ordered released from jail and ordered to return for follow-up hearings and outpatient mental evaluations, but a bench warrant was issued on Sept. 9 after Adesanya failed to return to court. Read more at The Washington Post.