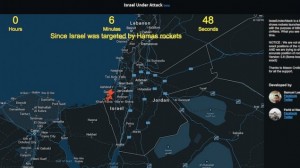 Anew tool to help protect Israeli civilians from Hamas rockets is the fruit of a joint effort by two Israelis, one a Jew and the other an Arab. While the government’s vaunted “Red Color” system sets off sirens where rockets are aimed, the new program can also tell you from where in Gaza the terrorists launched it.

The tool, called Israel Under Attack, was authored by Samuel Lespes Cardillo and Farid el-Nasire. The map is designed, Nasire said in a Facebook post, to allow people “to visualize the rocket’s trajectory, hopefully one day saving at least one life.”

The Israel Under Attack program shows a counter that times the gap between attacks, resetting itself when a rocket is fired. When an attack takes place, the map shows – in real time – where the rocket was fired from in Gaza, its trajectory, and the general area where it is expected to land.

Like Red Alert: Israel, the mobile audio alert that lists the general area where a rocket is headed, the Israel Under Attack map shows approximately what location was targeted, without giving away the exact location in order not to give terrorists intelligence on how accurate or inaccurate their aim is. Because of these security considerations, say the authors, “we are not showing the exact positions of a rocket’s landing, and we are trying to show the most accurate position of rockets.”