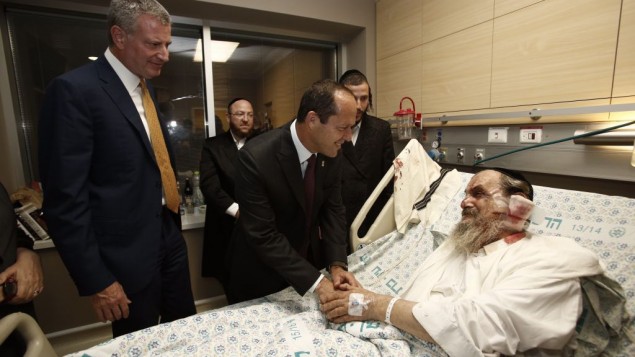 New York City mayor Bill de Blasio visited victims of a recent terror wave in Yerushalayim today as part of a “solidarity visit,” saying that pain felt by Yerushalayim was also being felt by his city.

“We feel extraordinary closeness, our people, by blood, by history,” de Blasio said. “So when you are going through pain, we feel pain too. When you’re under attack, we feel under attack, and I’m honored to be here in that spirit of solidarity and sense of common destiny.”

Among those de Blasio met with was Maria Veldman, an American born nurse and foster mother to 20 Arab children.

“You could see the stab wound on her chest. And instead of talking about anger and hatred, she talked about love and a desire to resume her mission,” de Blasio said, according to the New York Daily News.

“You can’t think about acts of terrorism like this in the abstract when you meet the victims and you meet the families. It becomes very real,” he said. “There can’t be peace when civilians are wantonly attacked just for going about their business.”

Barkat, alongside de Blasio, thanked the mayor for his visit and said the attacks in Yerushalayim had the same “evil” source as the September 11, 2001 attacks on the World Trade Center.

“The visit is an expression of the true friendship and solidarity between residents of New York and Jerusalem,” he said. “I have no doubt that just as New York residents overcame terror, so can Jerusalem soon return to normalcy.”

He is scheduled to meet with Prime Minister Bibi Netanyahu on Sunday.

“It’s a painful moment here in Israel, it’s a moment when I am certainly here in solidarity with the people of Israel,” de Blasio said during a visit with students from a mixed Israeli-Palestinian school. “This has to stop obviously. Look, these are attacks on civilians … No one should be condoning attacks against civilians.”

De Blasio met today with his Tel Aviv counterpart, Ron Huldai, in the seaside city before attending an event in the central town of Beit Shemesh sponsored by the school, Hand in Hand.